Roger Durling‘s on-stage interview last night with A Single Man star Colin Firth went on too long, but the conversational vibe was easy and unforced. And yet probing, amusing, revealing. I love the smile that always follows after Firth delivers one of those wry, self-deprecating comments. A very mellow fellow. The tribute reel reminded that he does anger quite well when a scene calls for it, but he has virtually none of it on his own, or so it seems.

I was convinced Firth was the leading Best Actor contender when I spoke with him in Manhattan a little more than two months ago, but now the apparent assumption is that Jeff Bridges has it in the bag for his Crazy Heart performance. Firth’s brand has nonetheless been upped. Everyone has come out ahead.

Firth’s classy gentleman aura — that sense of urbane reserve and sensitivity and aplomb– “is what everyone has been savoring since Firth broke through roughly 15 years ago,” I wrote in early December. “And now there’s widespread agreement that he delivers the finest variation of this very particular aura or attitude in Tom Ford‘s A Single Man.

“One of my questions began with a paraphrasing of John Ford’s quote about how directors make the same film over and over. Do actors do the same thing more or less? Firth didn’t disagree. His achievement in A Single Man is that he’s playing the deepest and most intriguing aspect of this patented thing. Because the role of George has found him in exactly at the right place and time, and vice versa.”

The after-party was held in an industrial park in eastern Carpinteria — a 15-minute drive. The SBIFF elite were cordoned off in two smallish, well-lit rooms that were protected by the usual goons in black suits.

One of the security guys — young and muscular with marble-black eyes — came up to me early on and asked to see my wrist band. I said I hadn’t been given one, but that SBIFF publicist Carol Marshall had walked me in. I assured him in any case that he wasn’t going to throw me out. He gave me one of those cock-eyed glares. He wanted to demonstrate his alpha-male capabilities, but Carol chilled him down. I’ve said this before but I were to run a security company I would (a) call it Cool Goons and (b) make a point of not hiring guys who stroll around parties looking for trouble. 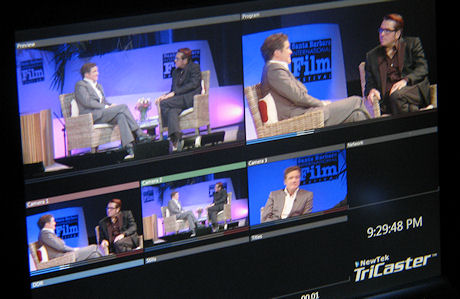 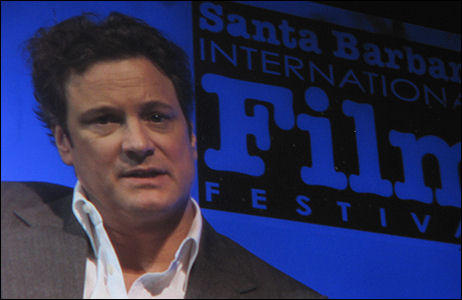 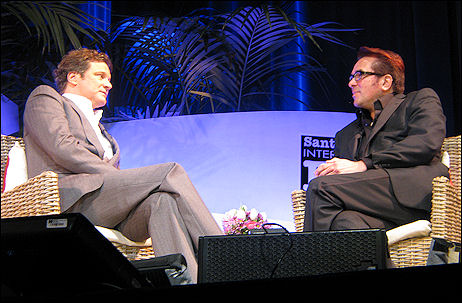