I’ve been keen to read Joel and Ethan Coen‘s True Grit script for a while now. This morning a draft of it (their third, dated 6.12.09) arrived in my inbox. I was dazzled right away by the robust poetic flavor of the Old West dialogue, which I presume is partly taken from the Charles Portis novel. There’s hardly a single line that resembles the English spoken today in the U.S. of Eloi, and it’s pure pleasure. True Grit-speak is as specifically unto itself as the Elizabethan English spoken during William Shakespeare‘s day. 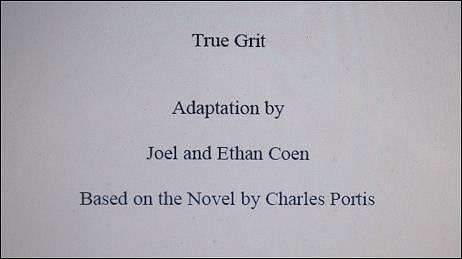 The Coens being the Coens, the story is grittier, more character-rich and funnier (in their usual sardonic oddball way) than the one used for the 1969 Henry Hathaway version with John Wayne, Kim Darby and Glenn Campbell. Jeff Bridges is going to have a field day as Rooster Cogburn, but then we knew that going in.

The Coens are apparently intending to cast an unknown as Mattie Ross, from whose perspective the story unfolds and who supplies the narration. They held an open casting call in Tulsa, Oklahoma about a month ago, and reportedly put out the word that “no acting experience is necessary.” The Oklahoman‘s Brandy McDonnell wrote that Mattie is “to be a simple, tough-as-nails 14-year-old…steely nerves, straightforward manner.” She cautioned that “hopefuls are advised not to make the mistake of trying to appear like or imitate Kim Darby, who played Mattie Ross in the original film.” And “no make-up model types.”