Who cares if Nell Minnow — a.k.a., “Movie Mom” at belief.net — has a problem with the red-band Kickass trailer that features costar Chloe Moretz and other under-age actors going all potty-mouth? Where is the intrigue or value in lamenting the effect of redband trailers upon American youths? Most younger teenagers would laugh in derision if they read this article…hello? 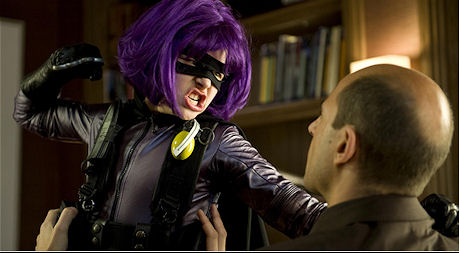 N.Y. Times reporter Brooks Barnes posted an article about this on 2.23. (It’s in today’s edition.) It’s extremely curious to see a piece in a world-class newspaper giving voice to concerns of people who don’t count and don’t matter.

“A trailer for the forthcoming film Kick-Ass that depicts the girl wielding a gun and using highly, highly profane language is igniting debate about how Hollywood advertises its R-rated films on the Web,” Barnes writes.

“Movie marketers in recent years have increasingly relied on raunchy ads known as red-band” trailers to stir interest in their films. While most trailers are approved for broad audiences by the Motion Picture Association of America, the red-labeled variety usually include nudity, profanity and other material deemed inappropriate for children. Many theaters refuse to run these trailers, but they are widely distributed online — and that is at the root of the current dust-up.”

On top of which the Times own attitudes are so blue-nosed that they haven’t even posted a link to the trailer that Barnes has written about. Or at least not that I noticed.