Some of the most gifted screenwriters in the business sorta kinda dropped the personality ball this morning. The goal of any participant in a panel discussion is to inject some energy and perhaps a little unruly pizazz into the proceedings. But this morning’s “It Starts With The Script” discussion, moderated by Indiewire columnist Anne Thompson, never got off the ground, much less got my pulse racing. 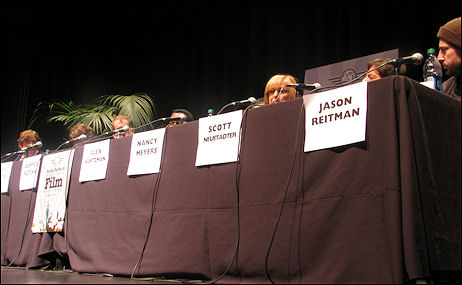 How’s this for a great angle and a great photograph? I would have shown up at the rear of Santa Barbara’s Lobero theatre for the the pre-discussion photo op, but nobody told me it was happening.

It was comprised of intelligent chatter from some very bright and accomplished people, of course, but there were no energy surges, no pop-goes-the-weasel moments, no jokes, no disputes…almost toothless.

You go to these things looking for a little Chris Matthews-type energy, some old-fashioned Crossfire action…whatever. Questions and teasers and provocations that might lead to sparks of some kind, a little contentiousness, a touch of the old no-you’r’e-wrong-and-here’s-why, etc. 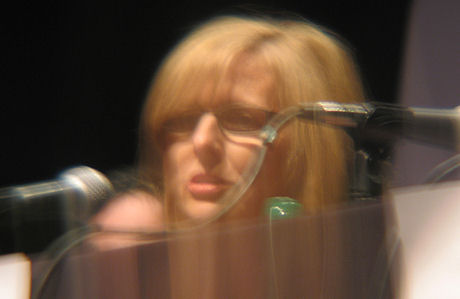 In all candor, I believe this to the most intriguing photo of Nancy Meyers that I’ve ever taken.