Not What It Was

Remember the excitement that accompanied Robert Harris and James Katz‘s 1991 restoration of Kirk Douglas and Stanley Kubrick‘s Spartacus? Called the “most extensive film restoration in history, painstakingly reconstructed from decades-old negative and color separation prints, at a cost of nearly $1 million,” etc.? The sumptuous detail of a large costume epic (set in Biblical times but not the least bit Biblical in story or theme) shot in Super Technirama 70 and all that? 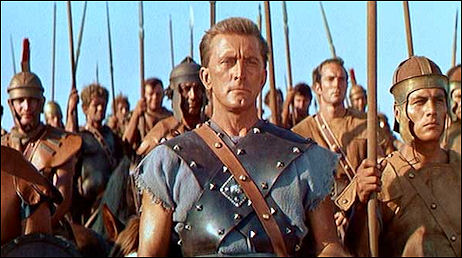 It’s now nearly 20 years later and guess what? The 2001 Criterion DVD version of this restored epic, which I happened to buy at Barnes and Noble yesterday, doesn’t look very good when you play it on a Bluray player and watch it on a 42″ HDTV plasma (i.e., my own). It looks okay at times, and at other times vaguely shitty — weak, not sharp enough, second-tierish.

And yet the same disc looked fine when I played it on my old 36″ Sony flatscreen. The problem, I’m told, is the Bluray player, which tends to bring out weaknesses on standard DVDs that don’t show up when you play them on a regular DVD player. So basically I’ve pissed away the dough that I bought the Criterion DVD with, and I’m not happy.

And I’m not sure I’ll be all that happy either when the Spartacus Bluray from Universal Home Video comes out on 5.25. If it’s anything like their 1998 DVD, which looks pathetic — i.e., washed-out color and a 2.35 to 1 aspect ratio framing for a film intended to be shown at a 2.2 to 1 — it’ll obviously be a problem. 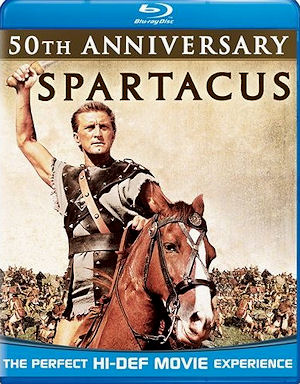 What needs to happen, of course, is for Criterion to produce its own Spartacus Bluray. But this can’t occur because Criterion doesn’t have the Spartacus home-video rights any more. Universal owns them, and they’re not about to let Criterion show them how the film should really look (corporate egos and all that) so forget it. Which means that all that incredibly difficult and super-costly work on the ’91 Spartacus restoration is basically a thing of memory. It would be nice if the full lustre of that restoration is revealed by the Universal Bluray, but it’s not very likely.