“Our Own Local Deity…”

I took some very sloppy and haphazard footage of Crazy Heart‘s Jeff Bridges during this afternoon’s Santa Barbara Film Festival tribute. I’m sorry. It happens. I guess I didn’t try hard enough. One reason that Bridges’ on-stage discussion with In Contention‘s Kris Tapley‘s was over in a flash is that Bridges “had a dinner reservation” so Tapley kept it short so as not to hang him up. Good manners.

Bridges said he thinks his Crazy Heart performance is among his “top five.” Tapley didn’t ask what the other four were, so here’s my…fuck it, here’s my top eight Bridges performances, in this order: (1) The Big Lebowski, (2) The Last American Hero, (3) Crazy Heart, (4) Rancho Deluxe, (5) Against All Odds, (6) Fearless, (7) The Fabulous Baker Boys, and (8) 8 Million Ways to Die.

Having read the Coen brothers‘ True Grit script and obviously knowing what Bridges can do (especially when inspired), I’m predicting that his performance as Rooster Cogburn will, eleven months hence, be commonly regarded as one of his finest. 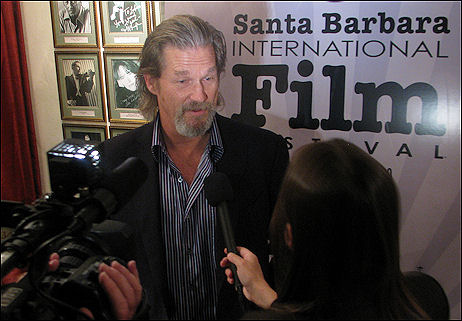