Still Sorta Don’t Get It

Vanity Fair‘s John Lopez has attempted to explain how the Academy preferential voting system is much more of a good thing than a bad thing. “The Academy grabbed our attention this year by expanding the best-picture nominees to an all-inclusive field of 10,” he begins. “But amid all the [talk] about whether or not this devalues Oscar, no one seemed to notice that the Academy also switched to a preferential voting system for the Best Picture category. 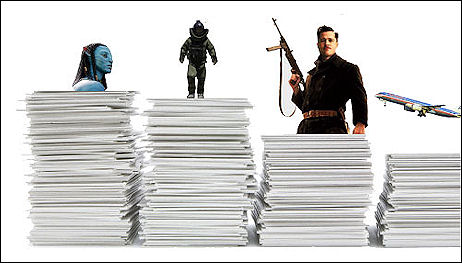 “That is, until Steven Zeitchik at the L.A. Times exposed the system, painting a nightmare scenario in which the most popular film doesn’t win; The New Yorker‘s Hendrik Hertzberg wondered if the new system might favor Hurt Locker; and Awards Daily mused that broad Academy love for Quentin Tarantino‘s self-proclaimed masterpiece Inglourious Basterds could let it pull an upset.

“Primed by our own love for Tarantino’s revisionist spaghetti-Holocaust drama (and inspired by Mark Lisanti‘s creative vision of how the new voting works), we at Little Gold Men figured that running a thought experiment — How could Basterds take the whole souffle? — might help us and you decipher the dark magic behind the Academy’s system. Our conclusion: the Academy might just have saved democracy.”