N.Y. Times critic A.O. Scott begins his Shutter Island review as follows: “[The film] takes place off the coast of Massachusetts in 1954. I’m sorry, that should be OFF THE COAST OF MASSACHUSETTS! IN 1954! since every detail and incident in the movie, however minor, is subjected to frantic, almost demented (and not always unenjoyable) amplification.” 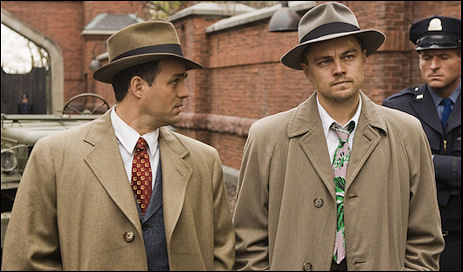 “The wail of strangled cellos accompanies shots of the titular island, a sinister, rain-lashed outcropping that is home to a mental hospital for the CRIMINALLY INSANE! The color scheme is lurid, and the camera movements telegraph anxiety. Nothing is as it seems. Something TERRIBLE is afoot.

“Sadly, that something turns out to be the movie itself.

“The full dimensions of [this] catastrophe come into view only gradually. At first everything is fine, or at least not quite right in a way that seems agreeably intriguing. Mr. Scorsese uses his considerable formal dexterity — his intimate, comprehensive understanding of how sound and image work together to create meanings and moods — to conjure a tingly atmosphere of uncertainty and dread.

“[But] you begin to suspect almost immediately that a lot of narrative misdirection is at work here, as MacGuffins and red herrings spawn and swarm. But just when the puzzle should accelerate, the picture slows down, pushing poor Teddy into a series of encounters with excellent actors (Emily Mortimer, Jackie Earle Haley, Patricia Clarkson) who provide painstaking exposition of matters that the audience already suspects are completely irrelevant.

“Mr. Scorsese in effect forces you to study the threads on the rug he is preparing, with lugubrious deliberateness, to pull out from under you. As the final revelations approach, the stakes diminish precipitously, and the sense that the whole movie has been a strained and pointless contrivance starts to take hold.

“[Scorsese] seems to have been unable to locate what it is in this movie he cares about, beyond any particular, local formal concern. He has, in the past, used characters whose grasp of reality was shaky — or who stubbornly lived in realities of their own making — as vehicles for psychological exploration and even social criticism. But both Teddy’s mind and the world of Shutter Island are closed, airless systems, illuminated with flashes of virtuosity but with no particular heat, conviction or purpose.”