I’m mostly cool with Niels Arden Oplev‘s The Girl With The Dragon Tattoo, the Danish-Swedish thriller that’s finally opening in the U.S. on 3.19. I have a slight beef, however, with the over-hypers, particularly the views of a friend, Jeffrey Ressner, that I recently posted. 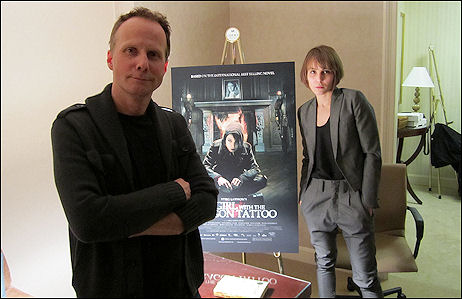 Ressner called it “the best movie of the year thus far…in the same vein of gripping genre genius as Let The Right One In…The Silence of the Lambs with a punk-rock Clarice.”

Dragon Tattoo is fine for what it is (particularly during the first and second acts) but it’s hardly a relative of The Silence of the Lambs. If anything it’s a cousin of The DaVinci Code. It’s not so much a character-driven emotion piece (certainly not by Silence standards) as much as a high-throttle Nordic whodunit.

I’m getting kicked out of the Starbucks I’m sitting in (the weenies are closing at 5 pm because of the snowstorm — tell that to the Starbucks employees living in Moscow) but I’ll be posting a video interview later tonight.