Roger Ebert has written a response to Chris Jones‘ touching profile of his situation and the state of his soul in the current Esquire. Roger is fairly laid back about it, although he takes exception to the line that he is “dying in increments.” 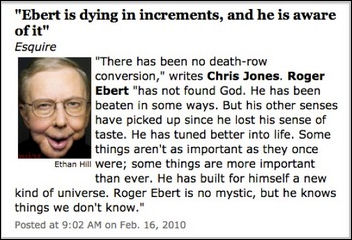 “Well, we’re all dying in increments,” he writes. “I don’t mind people knowing what I look like, but I don’t want them thinking I’m dying. To be fair, Chris Jones never said I was. If he took a certain elegiac tone, you know what? I might have, too. And if he structured his elements into a story arc, that’s just good writing.

“I knew going in that a lot of the article would be about my surgeries and their aftermath. Let’s face it. Esquire wouldn’t have assigned an article if I were still in good health. Their cover line was the hook: Roger Ebert’s Last Words. A good head. Whoever wrote that knew what they were doing. I was a little surprised at the detail the article went into about the nature and extent of my wounds and the realities of my appearance, but what the hell. It was true. I didn’t need polite fictions.

“[Jones] wasn’t precisely an eyewitness the second night after Chaz had gone off to bed and I was streaming Radio Caroline and writing late into the night. But that’s what I did. It may be, the more interviews you’ve done, the more you appreciate a good one. I knew exactly what he started with, and I could see where he ended, and he can be proud of the piece.”

“I mentioned that it was sort of a relief to have that full-page photo of my face. Yes, I winced. What I hated most was that my hair was so neatly combed. Running it that big was good journalism. It made you want to read the article.

“I studiously avoid looking at myself in a mirror. It would not be productive. If we think we have physical imperfections, obsessing about them is only destructive. Low self-esteem involves imagining the worst that other people can think about you. That means they’re living upstairs in the rent-free room.”