Support on Patreon Follow @wellshwood
40 Comments
“Bound To Be True”

Visit msnbc.com for breaking news, world news, and news about the economy

I fell so hard for the vibrancy and sharpness in the recently released African Queen Blu-ray that I wound up pigging out — not exactly watching it over and over but playing it over and over as white-noise accompaniment while I worked. Now I need a break. I did the same thing with my grandmother’s oven-baked corn bread when I was nine or ten — i.e., ate so much that I got sick, and then couldn’t even look at corn bread for years after that. 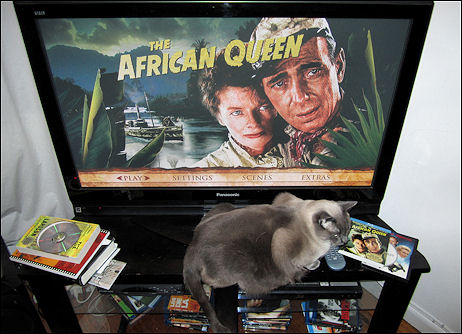 In early ’06 I paid $135 or $140 retail for a 150 gig external hard drive (i.e., the small kind that runs off your pc’s power when you plug in the USB). Two days ago I paid just under $100 for the same type of external hard drive, made by Seagate, except it has 500 gigs. A totally routine development. Two or three years from now a thousand-gig hard drive will cost $75 or thereabouts.

I told Jett the other day there’s no way I’m springing for an iPad. For cost reasons alone I’m waiting for the 2.0 or even the 3.0 before I even start to think about it. I will, however, be investing thought and money in formatting Hollywood Elsewhere for the iPad, and of course I’ll need to create an app. You could actually say I’ve been slacking off in this regard.

I didn’t have an especially great time with Tim Burton‘s Alice in Wonderland. I can see people taking the kids and maybe deciding they have no choice but to catch it because of the 3D factor. But I found Hubble 3D much more interesting and fulfilling even though it’s a somewhat routinely-made documentary. Why? Because it provides a feeling of awe that is 100% real.

All to say it really, really doesn’t add up that Alice in Wonderland is #1 at the box-office for the third week in a row, having yesterday brought in about $9.8 million from 3,739 locations. Okay, it’s a livelier-seeming attraction than The Bounty Hunter, which seems instantly dismissable to all age groups, creeds and cultures, as well as Repo Men, Diary of a Wimpy Kid, Green Zone and so on.

But Alice in Wonderland is still a fairly tepid thing to sit through, and I just don’t get why it hasn’t fallen off. I’m coming from knowledge and experience here. I don’t just “think” Alice isn’t that great a movie — I know it isn’t. I sat in a theatre with mostly Hispanic Eloi, side by side, and I could sense their emotional engagement levels, and they were not enthralled — they were sitting there like bean-bag chairs.

According to a five-month-old survey on weightlossdietwatch.com, Mississippi is the Jabba capital of the U.S. For five years straight it’s had the highest rates of adult obesity (32.5 percent). It also has the highest rate of obese and overweight children (ages 10 to 17) at 44.4 percent.

This is what rankles me about our health-care situation. Obviously not the Obama-proposed legislation (which the country definitely needs ) but the fact that the health prospects of your average sea lion rep a tremendous financial burden for everyone. The total cost of obesity, including “indirect costs,” is estimated to be $139 billion per year, and that ain’t hay.

Obese people pay 77% more for health care than normal-weighters. And two-thirds of American audlts are now either obese or overweight, the survey says. And most of the tonnage is accumulating in the poorer states in the South.

Clearly, buckets of Kentucky Fried Chicken pose a much greater threat to the lives of Americans than Middle-East terrorism. If obesity was smallpox or some other scary disease there would be sirens blaring and National Guard troops outside your windows right now.

Why hasn’t Barack Obama been more ardent about pushing a physical fitness program? Not just by giving a speech or two about it, but really getting on the train and urging schools to enforce exercise regimens like President Kennedy did in the early ’60s? I’m not exactly sure, but it probably has something to do with Obama’s not wanting to overly agitate obese swing voters.

The winner of the official Behanding in Spokane website‘s Christopher Walken impression contest.