Support on Patreon Follow @wellshwood
65 Comments
Blood Is Up

“Democrats should not listen to the people who are now saying they shouldn’t attempt anything else big for a while because health care was such a bruising battle,” writes Bill Maher. “Wrong — because I learned something watching the lying bullies of the Right lose this one: when they’re losing, they squeal like a pig. They kept saying things like, the bill was being ‘shoved down our throats’ or the Democrats were ‘ramming it through.’ The bill was so big they couldn’t take it all at once!

“And I realized listening to this rhetoric that it reminded me of something: Tiger Woods‘ text messages to his mistress that were made public last week, where he said, and I quote, ‘I want to treat you rough, throw you around, spank and slap you and make you sore. I want to hold you down and choke you while I fuck that ass that I own. Then I’m going to tell you to shut the fuck up while I slap your face and pull your hair for making noise.’ Unquote.

“And this, I believe, perfectly represents the attitude Democrats should now have in their dealings with the Republican Party: “Shut the fuck up while I slap your face for making noise — now pass a cap-and-trade law, you stupid bitch, and repeat after me: ‘global warming is real!’

“The Democrats need to push the rest of their agenda while their boot is on the neck of the greedy, poisonous old reptile. Who cares if a cap-and-trade bill isn’t popular, neither was health care. Your poll numbers may have descended a bit, but so did your testicles.

“Democrats in America were put on earth to do one thing: drag the ignorant hillbilly half of this country into the next century, which in their case is the 19th — and by passing health care, the Democrats saved their brand. A few months ago, Sarah Palin mockingly asked them, ‘How’s that hopey-changey thing working out for ya?’ Great, actually. Thanks for asking. And how’s that whole Hooked on Phonics thing working out for you?” 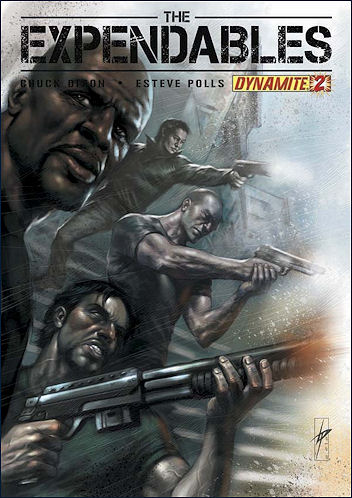 The films hogging all the hype and hoopla don’t necessarily count long-term. Otto Preminger‘s Saint Joan is more highly esteemed than Victor Fleming‘s Joan of Arc. A Song Is Born is generally regarded as a lesser version of Ball of Fire. Nobody except for fans of Nick Tosches‘ Dino: Living High in the Dirty Business of Dreams even thinks about Dean Martin and Jerry Lewis, much less 3-Ring Circus. And I’d never even heard of Edge of Doom or Our Very Own before seeing this photo. They both starred Farley Granger. 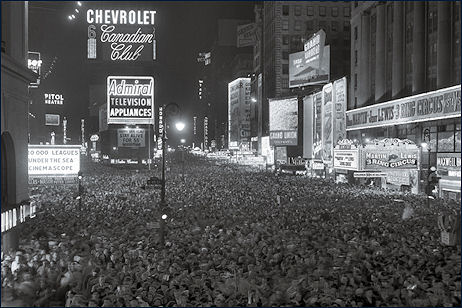 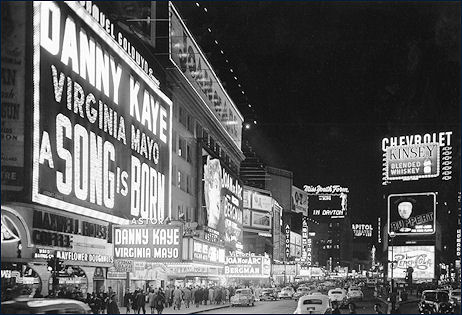 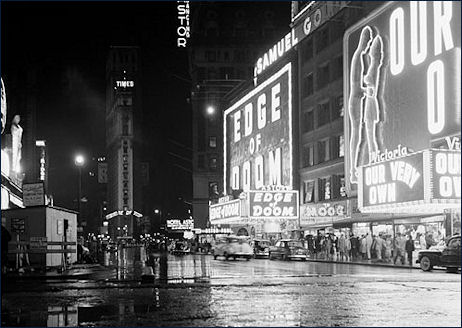 Dennis Hopper has been getting a lot of respect and affection lately. I could write about him for days and never run out of material. He’s like some kind of Mt. Rushmore figure now, beloved for his hipster authenticity and storied wackness. With the exception of Frank in Blue Velvet and the wackjob villain in Speed, the crazier or more eccentric or self-destructive Hopper seemed to be on a personal basis, the better he seemed to be on-screen. The saner and healthier he got, the less he seemed to bring.

Dennnis Hopper a day or so ago at Mann’s Chinese, in Giant (’56), during his extra-bad period in the late ’70s, with Daria Halprin in the early ’70s.

I tried to interview him at a Manhattan hotel in ’80 about Out Of The Blue, and he kept me waiting for over two hours — guess why? But at least now I can say I blew off a Dennis Hopper interview, etc. I have that memory. He came down to the lobby at the last minute as I was walking out, and I remember that hyper look in his eyes.

I could write about Hopper’s degenerated, cowboy-hatted Tom Ripley in The American Friend (“I know less and less about who I am, or who anyone else is”) until I’m blue in the face. Or his jabbering photo-journalist in Apocalypse Now. I remember quite liking his direction of Colors (’88) and The Hot Spot (’94). I don’t know why a guy like Hopper would direct something like Chasers (’94) except for the money. I guess that was it.

I’ve never even seen The Last Movie (’71), which destroyed his cred as a serious/rational/trustable director. It screened at the Aero in January 2009. I’d buy it in a second if it came out on Bluray or DVD, even.

Hot Tub Time Machine is at least as funny as The Hangover if not funnier, and it’s certainly much wilder, and it grossed a lousy $4.5 million yesterday? Which is only $900,000 more than the $4 million earned by the second-stanza Bounty Hunter, which people with taste and brains are said to despise? What happened?

Standoffish women is what happened. Plus the fact that HTTM only opened in 2700-plus situations compared to 4,055 screens for How To Train Your Dragon, the weekend’s top-grossing film, and 3384 runs for Tim Burton‘s second-place Alice in Wonderland.

I know what this film is, I know how well it played with the crowd I saw it with, and a $13 or $14 million weekend gross just doesn’t seem to add up. It’s not a disaster — it’ll end up with $45 or $50 million domestic — but it doesn’t seem proportionate to what HTTM actually is.

How To Train Your Dragon took in $12.2 million yesterday and Alice pulled down $4.7 million.

Those stories about Motherhood‘s $131 gross in London are almost a good thing, press-wise. Now there’s a slight curiosity factor, at least, whereas before no one cared. This day-in-the-life drama, directed by Katherine Dieckmann and starring Uma Thurman, has found historical distinction. To paraphrase former Secretary of State Edwin Stanton, “Now it belongs to the ages.”

I’m a little confused about why this story broke today when the IMDB says it opened in London on March 5th — three weeks ago! — but we’ll let that go. Here’s another IMDB link that seems to indicate it opened on 3.7, but maybe not. The N.Y. Post story says Motherhood opened in London “last Sunday,” or 3.21. What?

If the London wipe-out story hadn’t appeared, I probably never would have seen Motherhood. Now I’m thinking I will.

It’s unusual to see two trailers for the same film that (a) use different titles and (b) present the film in a somewhat different light. The movie is Jake Goldberger ‘s Don McKay (Image Entertainment, 4.2), a spider’s web drama that plays like a cut-rate Coen brothers film. It’s fairly awful. Drink hemlock, stab yourself with a pen knife, jump off a 30-story building, etc.

McKay played at last year’s Tribeca Film Festival. And yet last fall a trailer used the title Moment of Truth, and a YouTube blurb called it a “darkly comedic thriller noir.” About five weeks ago a new trailer for Truth, re-titled as Don McKay, sold it as a straight Fatal Attraction-type melodrama.

I was having trouble believing what I was watching. I was convulsing in my seat. It felt like a bad acid trip. I was asking myself, “Is this really happening? Somebody made this movie and I’m watching it?”

I’m stunned and amazed by the disparity between Church in Sideways and Leo in Frozen River and Shue in Leaving Las Vegas and coming away from these films persuaded that these gifted people are fairly golden and sage observers of the human condition, etc. And then you see them in a film like Don McKay and you wonder, “Are these guys trying to commit career suicide ? What happened to their brains? Couldn’t they have told the director ‘hey, this makes no sense’ and somehow improved their performance?'”

I’ll run my full pan (which I wrote this morning) closer to opening day. There’s no hurry.

A shortened monochrome re-edit of Peter Jackson‘s King Kong by a guy named “geKKo” was posted in the summer of 2007. It’s 38 minutes shorter and an absolute improvement. It’s what King Kong might have been if the Universal suits had stood up to Jackson and told him that a nearly three-hour-long tribute to a 1933 film that ran 105 minutes was an exercise in self-mockery.

Other movies regarded as overly indulgent and/or too long have presumably been recut and posted online in similar fashion. This is how it should be now and forever. Other films could surely benefit from this process, but which?

* Less sailing around in circles.

* Deleted attack of the giant bugs.

* Removed CG juggling for Kong, who looked just as unimpressed by it as I was.

* Lots of other minor cuts to improve pacing. In total, over 90 cuts!

* Converted to black and white. (Oddly enough the DP at one point suggested to PJ that they shoot the film in black-and-white.)

* Added “Vintage Edition” under the main title, and re-editor credit at the end.

“I actually like Peter Jackson’s King Kong a lot. But at nearly 3 hours long, the plot feels laborious at times. By cutting out a lot of exposition about the island before they find it, it actually makes the island more mysterious once they arrive. And although the CG animation to bring Kong to life is impressive, the green screen visual effects of people running with the dinosaurs looked a bit subpar. Not only that, it was really hard to believe that people could run around underneath dinosaurs and not get trampled upon. Furthermore, having raptors in the movie just made it feel too much like Jurassic Park, so that entire chase sequence was trimmed down considerably.

“The other big CG sequence that was cut is when the giant bugs start attacking. This scene was actually supposed to be in the original King Kong movie (1933) but was cut for being too scary. In the 2005 version, the purpose of this scene was to kill off some minor characters, give Jamie Bell something to do, and make Baxter look heroic by having him swoop down on a rope shooting giant arachnids with his machine gun. But in the end, it did nothing to move the story forward. We really don’t care if Baxter is a hero or not because his story doesn’t go anywhere from there. Also the bug attack came right after the big Kong vs T-Rex battle, so it seemed like an undercard fight right after the main event. Basically, I think WETA wanted to show off their CG skills by having a giant weta bug suck on Adrien Brody‘s face.

“Overall, King Kong is quite the visual effects achievement and a pretty good movie overall. It’s got a solid cast, dramatic moments, a poetic score, intense action sequences, and a little bit of comedy. I would not have re-edited it if it wasn’t a movie I liked. I have to give Peter Jackson a lot of credit for re-making this classic and for introducing the eighth wonder of the world to a new generation.”