“A History of Censorship”

Nearly 26 months ago I debunked a then-current rumor about a DVD of Ken Russell‘s The Devils — a visually luscious, insanely flamboyant period melodrama about political persecution — coming out on 5.20.08 via WHV Direct. WHV spokesperson Ronnee Sass called her company’s brief online announcement a “mistake” but said “the title may make an appearance down the road.” Well…? 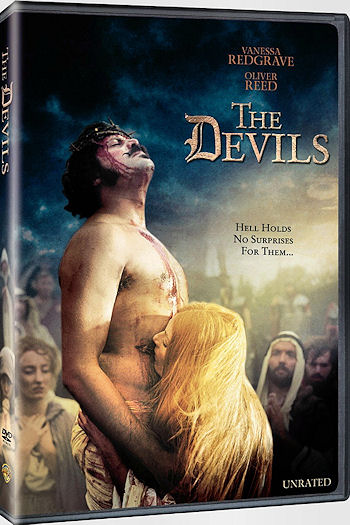 HE respectfully requests the honorable George Feltenstein to please reveal when, if ever, this perverse but astonishing film — which the religious right would absolutely despise and throw a shit-fit over if they were hip enough to watch it in the first place, which of course they’re not — will see the light of day.

The DVD jacket cover, sent by WHV to dvdverdict in February ’08, doesn’t look like WHV Direct art — it looks like art for a conventional commercial DVD.

The Devils (1971), which boasts superb performances top to bottom beginning with stars Oliver Reed and Vanessa Redgrave, is a highly literate, wildly impressionistic depiction of the rise and fall of Urbain Grandier, a 17th century French priest executed for witchcraft.

The Devils is based partially on Aldous Huxley‘s “The Devils of Loudun” (1952), and partially on the 1960 play The Devils by John Whiting, also based on Huxley’s book. If nothing else The Devils was enhanced by production design (done by the late Derek Jarman) that was drop-dead immaculate.

The Devils is a kind of political horror film. It’s about the crushing of freedom by political demagogues using every revolting trick in the book to whip up fear and ignorance among the religious faithful. Incredibly cruel and vicious things happen. The film has an acute atmosphere of evil and wickedness and corruption. It’s horrible and yet spellbinding. I’ve never felt such rancid vibes emanating from the pores of any film before or since.

Which is why it reminds me today on some impressionistic level of the Sarah Palin loonies and the rocks they’ve thrown through the windows of Democratic officials and reps around the country. There’s no question that Palin is the reigning fiend in American politics today. I have no doubt that if she was to be somehow time-machined back to Loudon during Grandier’s persecution (and was also made to instantly speak French), she’d scream for his death.

The Devils‘ Wikipedia page strongly suggests why WHV is still piddling around with the release of the DVD.

“Since the time of its release, the film has caused enormous controversy. In the United Kingdom it was banned by 17 local authorities, and everywhere attracted many scathing reviews. Judith Crist called it a ‘grand fiesta for sadists and perverts‘ while Derek Malcolm called it ‘a very bad film indeed.”

“However, it won the award for Best Director-Foreign Film in the Venice Film Festival, despite being banned in the country. The United States National Board of Review awarded Ken Russell best director for The Devils and his next film, The Boy Friend.

“In 2002, when 100 film makers and critics were asked to cite what they considered to be the ten most important films ever made, The Devils featured in the lists submitted by critic Mark Kermode and director Alex Cox.

“The Devils is a highly controversial film which has a history of censorship. The film is a strong condemnation of religious institutions such as the Catholic Church and organized religion in general. This, combined with its unrelentingly graphic depictions of sex and violence, has led to its history of censorship.

“The film’s combination of religious themes and imagery combined with violent and sexual content was a test for the British Board of Film Censors that at the time was being lobbied by socially conservative pressure groups such as the Festival of Light.

“In order to earn an X certificate, Russell made minor cuts to the more explicit nudity (mainly in the cathedral sequences) and removed some violent detail (notably the crushing of Grandier’s legs). 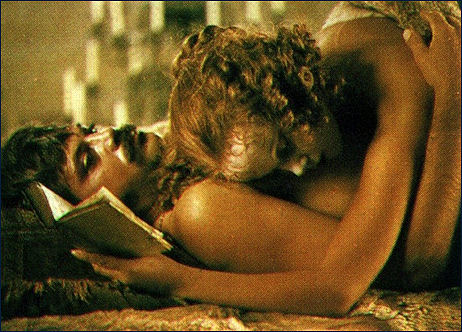 “Its fate in the United States was even more stringent, with a further set of cuts made to even more of the nudity with some key scenes (including Sister Jeanne’s crazed visions, exorcism and the climactic burning) shorn of the more explicit detail.

“The British version remains the most complete one in circulation, although there are long promised plans to release the uncut version on mass-market DVD. On April 25, 2007, The Devils was shown for a second time in its fullest possible state to a group of students and staff at the University of Southampton, followed by a question and answer session with the director, AND moderated by Kermode. It was the first significant event to take place during Russell’s tenure as a visiting fellow at the University of Southampton in the English and film departments, April 2007 to March 2008.

“An NTSC-format DVD edition on the Angel Digital label appeared in 2005, with the so-called ‘rape of Christ’ scene and other censored footage restored, and featuring a documentary by Kermode about the film, as well as interviews with Russell, some of the surviving cast members, and a member of the BBFC who participated in the original censorship of the film.

“DVDActive.com announced on February 28, 2008 that The Devils would finally be released on DVD by Warner Home Video in the U.S. on May 20, 2008, in the uncut (111 minutes) version, but without additional material. However, a day later, a DVDActive forum post asserted that the release had been dropped from Warner’s schedule.”

Update: An industry friend believes that “one problem with The Devils is [Warner Bros. president & CEO] Alan Horn‘s overall conservatism, especially towards religion, as even The Hangover gave him problems, which is on record. So distributing a film on DVD that could incur the wrath of the religious right is not high on his agenda. He’s a thought-police kind of guy who has major issues with raunch.”