Yesterday I visited the midtown Manhattan office of AnyClip, a soon-to-launch movie clip-finding site that locates and plays clips (plus dialogue transcripts plus the usual data) from almost any film ever made in the history of human endeavor using only anecdotal or fragmentary information. It’s the smartest film- or dialogue-finding site I’ve ever surfed in my life, bar none. 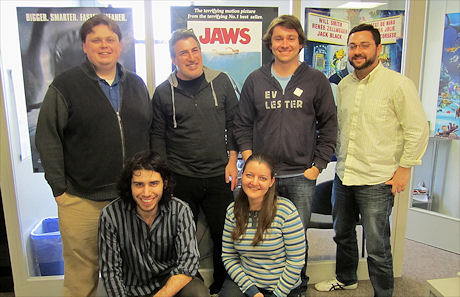 It’ll be up and rolling on March 15th (i.e., Monday morning), concurrent with a visit by the AnyClip team to South by Southwest this weekend and early next week.

With any luck or pluck AnyClip will soon be a major go-to site for film buffs of any stripe, right up there with IMDB and Amazon and Wikipedia, because it’s propelled by what may be the most brilliantly designed movie-and-dialogue-locating software ever coded or created.

I’m not exaggerating — this site can find any friggin’ movie under the sun using any sort of incomplete or half-assed information. Title, stars, costars, dps, directors, whatever…but most impressively, dialogue fragments. And when it strikes paydirt it brings up corresponding clips and pages of dialogue plus rental/purchase links.

I tried to stump the software several times during my chat with co-founders Aaron Cohen and Nate Westheimer, and I beat it only once when the system couldn’t recognize a line from East of Eden. But that’ll soon be taken care of. I forget how many films they’ve stored and referenced so far, but we’re talking thousands upon thousands. The tech team began with broadly popular titles and movie stars, etc., and are working their way through less well-known, more esoteric fare as we speak.

The technological base of AnyClip is located in Israel, and the whiz-kid software designer is a guy named Maor Gillerman, who wrote this morning in an e-mail that he’s “an avid reader of Hollywood Elsewhere since Mr. Wells’ dissection of the Coen Brothers’ No Country For Old Men two years ago.”

The idea behind AnyClip is to engage casual viewers who are curious about this or that film (or who are looking to investigate a flick they vaguely remember in terms of a line of dialogue or a character or an actor, but can’t recall the title of) and prompt them to go to NetFlix or Amazon and rent/purchase. That or just surf around on this site for hours and waste your entire day.

It’s the same subtle suggestion technique I’ve personally succumbed to dozens of times while browsing at West LA’s DVD/Laser Blazer — i.e., deciding to rent or buy Groundhog Day or Out of the Past on the spur of the moment because it’ll be playing on the store monitors, and watching a certain scene or hearing a piece of dialogue puts me in the mood.

I’m not entirely up to snuff on all the search terms and devices, but I know you can find movies with almost any dialogue ever mouthed by any actor since the days of Lewis Milestone and Howard Hawks. And not just the generic, well-known quotes from famous films (“Frankly, my dear, I don’t give a damn”) but just about any line at all, or even a fraction of one. 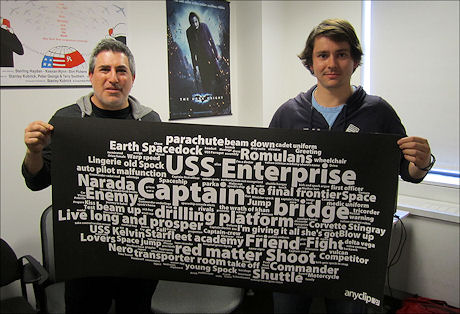 AnyClip.com co-founders Aaron Cohen and Nate Westheimer with a poster composed of AnyClip search terms from The Howards of Virginia….kidding!

I told Westheimer to type in “what can a man do with his clothes off for 20 minutes?” and wham, AnyClip found it in four seconds — i.e., the Chicago hotel-room scene between Cary Grant and Eva Marie Saint in North by Northwest. It also found every film in the history of the universe that has used that line, or a portion of it. It covers the entire waterfront with every search.

There’s a minor line that Groucho Marx says to a steward in Night of the Opera — “Hey, turn off the juice before I get electrocuted!” AnyClip found A Night at the Opera like that, and a clip from that particular scene plus other films and scenes that used the words “juice” and “electrocuted” — it’s really amazing.

I could go on and on and on, but that’s the gist of it. Oh, yeah, there’s a Blu-ray searching software that they’ve also come up with in which you can search a Bluray you’re watching using this and that term. I didn’t respond as strongly to this as the dialogue-search thing, but fine, cool, good to go.

And just to reiterate: there are three AnyClip guys named Aaron Cohen — bossman Aaron Morris Cohen plus Aaron “Chris” Cohen and Aaron Fisher Cohen. Here’s a video about the army of Aaron Cohens that inhabit the greater New York City area or the tri-state area or whatever.

March 12, 2010by Jeffrey Wells40 Comments
« Previous post
Does Anyone Want Dury/Serkis?
Next post »
They Sat For This?