Complain all you want about the metaphor of blue-collar losers succumbing to nihilistic downswirl in American Idiot, the soon-to-open Green Day musical based on the 2004 album that Michael Mayer (partnering with songwriter/frontman Billie Joe Armstrong) has directed and co-authored. But you must acknowledge that the intense vigor, bullwhip discipline and visual-glam audacity that comprise the presentation of the show are knockout-level and totally top-tier.

American Idiot is something to argue about in terms of its vision and to perhaps feel irked by (a 23 year-old reminded me after last night’s performance that semi-hip pop-music lovers from his corner of the room despise Green Day, and that he doesn’t like the way the play portrays his generation), but it’s clearly a show and a half.

American Idiot opens on April 20th — three weeks hence — and will probably be well reviewed by a good chunk of the critics, and will obviously sell high-priced tickets hand over fist.

Call it a 21st Century rock opera that’s part Tommy/Quadrophenia, part Vegas flash, part Spring Awakening, part Rent and part shock-and-awe on a multi-media trash-culture set that rises a good 55 or 60 feet in height, and which features a large ensemble cast (under 25, energy to burn, backed by an onstage band) performing 21 Green Day tunes, some Twyla Tharpish dance moves, a striking aerial ballet on wires….forget it, okay? There will be no “meh” responses to the spunk and razmatazz of this thing.

American Idiot is going to be tour-bus Eloi central for the next several months, and a thing that pretty much all musical lovers will need to check out and confront. It’s a road show waiting to happen, and almost certainly a filmed musical in two or three years.

Going in I knew only that the show (based, as noted, on Green Day’s socio-political rock opera) was about three blue-collar guys with nothing in their hearts or skulls except a yen to submit to something strong — big-city distractions, heroin addiction, Iraq War combat, couch-potato vistas, early parenting — as a way to escape the nothingness of small-town life. 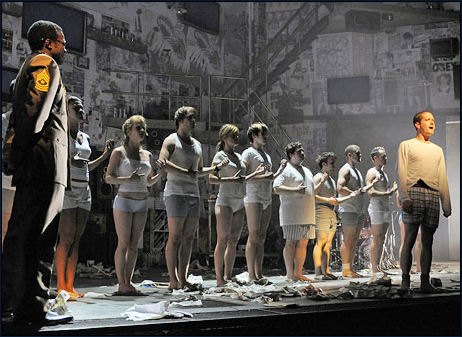 Johnny (John Gallagher, Jr.), Tunny (Stark Sands) and Will (Michael Esper) aren’t creators or pathfinders. Building a life out of dreams or grit or drive (or at least a search for something transformative that might happen through college or travel or what-have-you) never occurs to them. They’re just three “let us outta here” bozos who get outta there and then get busted up and turned around, and who finally wind up back in their home town living lives of quiet tedium.

They reminded me on some level of the three fellows who go off to Vietnam in The Deer Hunter, suffer the odd horrors of that conflict and end up singing “God Bless America” over Thanksgiving dinner. Except the American Idiot guys (only one of whom actually serves in Iraq) end up singing “wow, we blew it…we thought we were bold and clever and different, and we’re not. We’ve become the complacent American idiots we started out despising.”

All through the 90-minute, intermission-free show I was saying to myself, “Wow…a primal, kick-out musical that I’m having a pretty good time with, and which feels at least moderately hip in its eagerness to provoke and not placate — a show with the nerve to make hay out of aimless American-youth ennui among the post-9/11, Iraq War-fighting generation.”

This nihilism gives American Idiot a kind of integrity, I feel. The show may misrepresent in this or that way, but it’s not my idea of a “lie.” I know a little about how things feel among suburban guys living lackluster lives (my late brother essentially died from this), and I can only presume that things are worse for uneducated “whatever, man” types from the thousands of backwater towns out there. It’s a bit of a drag to think about life in these terms. I wasn’t “with” these three characters, but I don’t have the stones to tell Mayer or Armstrong that they’re wrong — that things aren’t this grim for millions from this milieu. 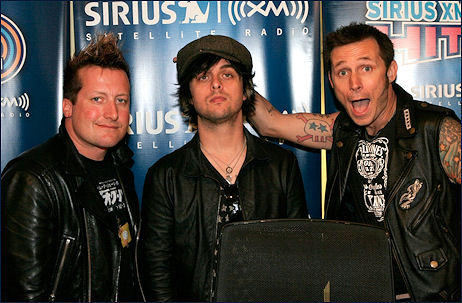 In his 10.10.09 review of the Berkeley Rep production of American Idiot , N.Y. Times critic Charles Isherwood wrote that “mournful as it is about the prospects of 21st-century Americans, the show possesses a stimulating energy and a vision of wasted youth that holds us in its grip.

“And to ring a variation on the Woody Allen joke about sex being dirty if you’re doing it right, the only thing sadder than wasting your youth is not wasting it.”