An initially inaccurate Dark Horizons story about the 3.19 release date of Floria Sigismondi‘s The Runaways being bumped back to April 9th led to The Playlist and then this site following suit. The story was wrong — The Runaways is opening on 1400 screens on 3.19 (according to a just-received Falco Ink press release) and then expanding on 4.9. 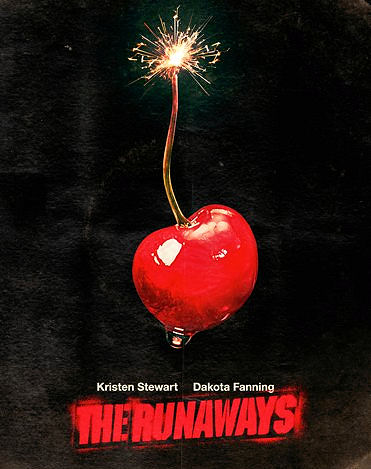 Apologies for not taking the time to call. The fact that I was in a heebie-jeebie state in a North Bergen cafe following my tire-change episode is no excuse. I’m ready to throw up.

I still say Apparition needs to fix that cherry-bomb teaser poster. The dripping redness is plenty suggestive, but there are indistinct shapes and shadows in the black background that you can’t make out. Bothersome.

The Playlist described the film as “critically shrugged.” That makes it sound like almost everyone at Sundance 2010 put it down. I don’t recall that. I’d call it “somewhat review-challenged.”

I wrote during the festival that “as long as the film is focused on Kristen Stewart‘s Joan Jett and Michael Shannon‘s Kim Fowley and the generally pungent ’70s atmosphere, it radiates badass attitude and seems authentically plugged in to the spirit of ’70s rebel rock.

“Unfortunately, Sigismondi’s script is primarily based on Cheri Currie‘s autobiography, Neon Angel: The Cherie Currie Story, which tells of her background plus her drug and alcohol problem that arose from her success with the Runaways.

“This means that in too many portions we’re stuck watching Curie’s fairly boring story, since no rock-industry cliche is more mind-numbing than the one about a famous rock star burning out on drugs. Which also means we’re stuck with Dakota Fanning , who gives an opaque, space-case performance as Curie — blankness personified.”