This snap, of course, shows the filming of Inglourious Basterds costar Melanie Laurent as she runs from the clutches of Christoph Waltz at the end of the famous French farmhouse house. if you know this scene you know she runs across the field barefoot. (Director Quentin Tarantino included an insert shot of her dirty bare feet.) You’ll notice in this shot, of course, that she’s wearing Nikes. My heart sank when I spotted this. I felt almost betrayed. 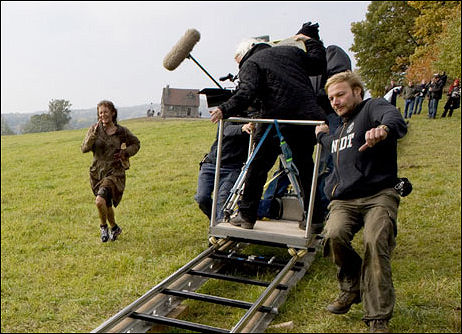 Tarantino, clearly, is no Eric von Stroheim-styled realist. If I’d been the director I would have told Laurent the following: “Closeups, inserts, master shots…you’re supposed to be running barefoot across a field and that’s the reality of the scene. I don’t care how good an actress you are or if no one ever suspects you aren’t barefoot in the closeup shots. I just don’t want you wearing fucking Nikes during a World War II film…period. Wearing them betrays the reality of the character, the period…it’s the same thing as being stoned before I call ‘action!'”

Hollywood legend has it that Von Stroheim insisted that actresses in an historical film he was directing had to wear authentic underwear from the period. The audience could have never known this, but von Stroheim knew. And on some level he felt it mattered in terms of the reality being portrayed. That’s the mark of a true madman.