I briefly spoke with Fox’s Gerald Rivera on his Geraldo At Large show last night around 10:10 pm. The subject was all the recent negative stories about The Hurt Locker (articles about the film’s lack of authenticity, Sgt. Jeffrey Sarver‘s lawsuit based on his claim that he was the basis for Jeremy Renner‘s character, the Nicolas Chartier snafu), and whether this might impact the Best Picture race. 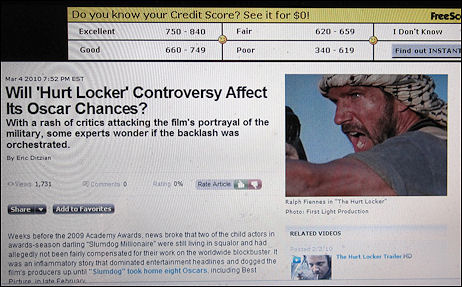 I was asked to contribute, I gather, because Geraldo or one of his researchers saw Eric Ditzian‘s 3.4 MTV.com article (“Will ‘Hurt Locker’ Controversy Affect Its Oscar Chances?”) in which I was quoted saying that the Hurt Locker attacks were “obviously coordinated…these things don’t happen at the last minute on their own.” What I meant was that they were coordinated — initiated, researched, reported on — by like-minded editors and reporters looking to portray a last-minute tightening drama in the Best Picture race.

Geraldo said during our on-air chat that he’d been told by a source that “a producer of Inglourious Basterds” had allegedly fired a press torpedo or two directly at the hull of The Hurt Locker. He obviously wanted me to say “yeah, I’ve heard that also…probably true!” Except I don’t know or even suspect that so I naturally declined to point the finger at anyone connected to Basterds (i.e., Harvey Weinstein). No one’s even whispered there’s anything to this — zip

So I said what I basically think, which is that certain journalists and editors sensed a great dramatic potential a few weeks ago in the prospect of a Hurt Locker reversal-of-fortune, especially after the BAFTA and Eddie Award wins created a front-runner status, and so some decided to research and write articles that might introduce a cliffhanger element into an already thrilling David-vs.-Goliath scenario.

That scenario was waay too complex for Geraldo At Large, of course, so the conversation ended soon after, the show went to a break, Geraldo said “thanks, man” and I said “sure, likewise” and scooted off.