Yesterday I wrote that “nobody even thinks about Dean Martin and Jerry Lewis” these days “except for fans of Nick Tosches‘ Dino: Living High in the Dirty Business of Dreams.” Which, of course, inspired a fresh attack from Some Came Running‘s Glenn Kenny . 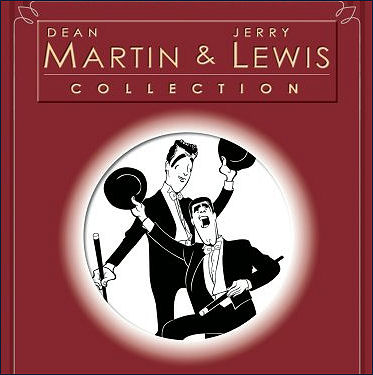 Glenn wrote that I was “dying to throw a gratuitous insult at the ‘dweebs’ and ‘monks’ who value those Martin/Lewis films, but [am] also a little mindful of coming off like a closet Eloi. So [Wells] yokes the enthusiasm to the Tosches book, which he takes as some sort of signifier of cool, and posts, believing that he’s having it both ways. Insufferable, really.”

I responded as follows: “I don’t know my Martin & Lewis films like I should (I like Sailor Beware and Artists & Models), but Tosches’ book — which IS an eternal signifier of cool as it continues to enjoy renown as one of the finest showbiz bios ever written — turned me on to the fabled genius of their live act when they were really hot & crackling — in the mid to late ’40s (and perhaps the very early ’50s).

“Martin & Lewis never really replicated on film what they struck with a match onstage, Tosches wrote. All I was saying in the post is that Martin & Lewis were comics of their time who aren’t, it seems, generally regarded, much less worshipped, as legendary world-class film comedians 70 years hence. (Largely because of the disparity between their nightclub act vs. films. ) Maybe the tide is turning and one day Average Joes will think of them in the same light as the Marx Brothers or Laurel & Hardy. All I was saying is that right now that regard doesn’t seem to be out there. Am I wrong?

From their Wikipedia bio: “In 1945, Dean Martin met a young comic named Jerry Lewis at the Glass Hat Club in New York, where both men were performing. Martin and Lewis’ official debut together occurred at Atlantic City’s 500 Club on July 24, 1946, and they were not a hit. The owner, Skinny D’Amato, warned them that if they didn’t come up with a better act for their second show later that same night, they would be fired. 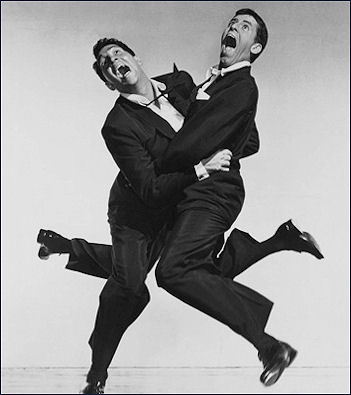 “Huddling together out in the alley behind the club, Lewis and Martin agreed to go for broke, to throw out the pre-scripted gags that hadn’t worked and to basically just improvise their way through the act. Dean sang some songs, and Jerry came out dressed as a busboy, dropping plates and more or less making a shambles of both Martin’s performance and the club’s sense of decorum. They did slapstick, reeled off old vaudeville jokes, and did whatever else popped into their heads at the moment. This time, the audience doubled over in laughter.

“Their success at the 500 led to a series of well-paying engagements up and down the Eastern seaboard, culminating with a triumphant run at New York’s Copacabana. Club patrons were convulsed by the act, which consisted primarily of Lewis interrupting and heckling Martin while he was trying to sing, and ultimately the two of them chasing each other around the stage and having as much fun as possible.

“The secret, they have both said, is that they essentially ignored the audience and played to one another.”