Yesterday L.A. Times columnist Patrick Goldstein reported that Variety editor Tim Gray and various entertainment reporters at the trade have been telling publicity execs that if they give casting scoops to any of Variety‘s online competition, the paper won’t run their big announcement stories in print, relegating them to online posts only.” 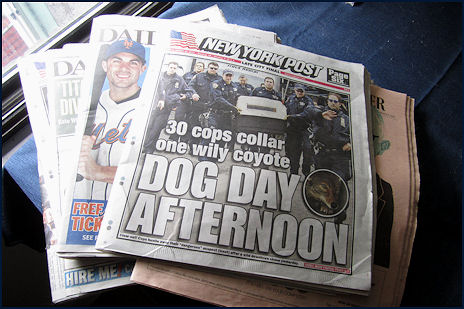 Gray confirms this to Goldstein: “We’ll put the [already-posted] story on the web — for the record — but we won’t put it in the print edition.”

The “print edition”? As Goldstein notes, “Many of the younger studio executives, managers and agents in town probably haven’t seen a print copy of Variety in years, preferring to get their news from web alerts sent to their BlackBerries.”

I had a wake-up moment yesterday morning. I’d just come back from a diner with copies of the N.Y. Daily News and New York Post, and I threw them on top of a small pile of newspapers in the kitchen that I’ll eventually recycle. And I suddenly stopped and looked at all that newsprint, that weight, that adder of clutter, that metaphor for the past, that waste of lumber and household space, that unsightly annoyance. And I said to myself, “What a waste newspapers have become.”

I may have said this to myself once or twice before over the last ten years, but I said it with real conviction this time. There’s only one specific circumstance in my life in which newspapers are really and truly welcome, and that’s when I’m sitting down alone in some European cafe. Then I regard newspapers as dear friends. And I guess you could add the solace of reading newspapers on trains (i.e., until trains start providing wifi-on-the-go). But in every other instance you can have ’em.