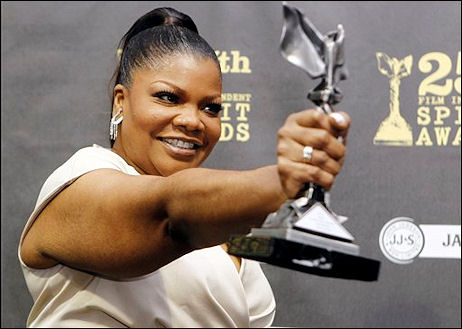 The upside is that after Sunday night’s Oscar telecast no one will have to clap for or nod approvingly or even think about Precious ever again.

As noted elsewhere The Hurt Locker wasn’t a contender because it was nominated in two acting categories at last year’s Spirit Awards (which came a little more than five months after Hurt played Venice/Toronto and roughly four months before it would open commercially), which naturally disqualified it from being among this year’s nominees. A few months ago I was told by a person in Dawn Hudson‘s FIND office that the ’09 nominations happened as a result of the film having been submitted by someone at Summit Entertainment, the distributor of The Hurt Locker.

It would have been nice to see someone other than Crazy Heart‘s Jeff Bridges win the Spirits’ Best Actor award (which FIND calls the Best Lead Male award). A Single Man‘s Colin Firth should have won it — after all the campaigning he did he could have had one night in the sun. But no — the Bridges blitzkreig (which will reach its big crescendo tomorrow night) had to prevail. Bridges, Bridges, Bridges, Bridges…Bridges already!

Christian McKay, who kicked serious Wellesian ass in Me and Orson Welles, should have won the Best Supporting Actor award — it’s really that simple. He delivered a much grander and tastier rock ‘n’ roll performance than did the winner, The Messenger‘s Woody Harrelson.

Hooray for (500) Days of Summer‘s Scott Neustadter & Michael H. Weber winning for Best Screenplay. It was nice to see Lone Scherfig‘s An Education win for Best Foreign Film — except that no one in the educated film world thinks of An Education as “foreign.”

Everyone loved the triumph of Anvil! The Story of Anvil winning the Best Documentary award — yeah! Except no one has explained to me how The Cove , which many suspect/hope/believe will win the Best Feature Documentary Oscar tomorrow night, wasn’t even nominated by the Spirits in this category.

Cheers to Roger Deakins for winning the Best Cinematography award for his work on A Serious Man, and also to Joel and Ethan Coen for having hired Deakins and winning lastnight’s Robert Altman Award. And a hearty pat on the back to the Humpday crew for snagging the John Cassavettes Award.