I caught a screening last night of Paramount’s finely restored version of John Huston‘s The African Queen (1951), which will be issued on DVD and Blu-ray on 3.23. I was happy to see it, happy to see a short doc that explains how the restoration came about, and happy to meet Paramount’s vp of restoration Ron Smith — the guy who saw the project through from start to finish. 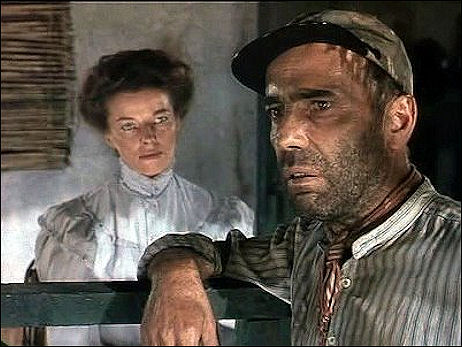 How much better looking is this new Queen than the version that gets shown on Turner Classic Movies now and then? A lot better, I’d say. Some of it looks amazing — sharper focus, smoother textures, no blotchy colors. There are portions that look only slightly or somewhat better because they were matte shots or African location footage to begin with, and therefore were never as clean and well lighted as the sound stage work Huston shot in London, but they still look better than they ever have. And the sound has been nicely enhanced (i.e., the usual scratches, hisses and pops removed).

And Katharine Hepburn looks a bit prettier or glammier, even, than she has before in this film. (Her cheekbones were quite amazing.) And Humphrey Bogart‘s beard looks more specifically scruffy, his facial color is more tanned, and the stains on his shirt and pants and grubby little hat are more noticable.

Nobody has to be sold on The African Queen being a must-own classic, except that it obviously hasn’t been ownable until now. It looks as good as it’s ever going to look, or significantly richer and fresher than before…however you want to put it.

The screening happened at Viacom screening room at Broadway and 44th. Some Came Running‘s Glenn Kenny and New York Post critic Lou Lumenick also attended. Delicious cupcakes and other things that are quite bad for you were served after the screening. 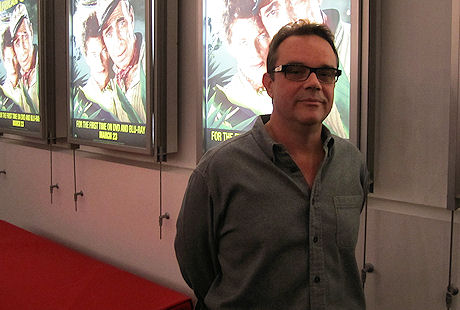 I spoke to Smith about the restoration particulars, and about other large-format (i.e., mostly VistaVision) films in the Paramount library that he’s been remastering for high-definition broadcast and eventual Blu-ray. (Like The Ten Commandments, To Catch A Thief, etc.) I was particularly interested in the fate of Marlon Brando‘s One-Eyed Jacks, for which the copyright expired in 1988 and which is now a public domain title. The bottom line is that Paramount has all the primary materials, but unless they can arrange to protect some portion of the copyright (like the literary rights, let’s say) there’s nothing to legally prevent other companies from ripping off their upgrade and putting out their own version.

Smith arranged to get access to The African Queen‘s original three-strip Technicolor negative in England, and then had it scanned and sent via a high-end server to Motion Picture Imaging in Burbank to be restored and recombined. Smith has noted that “this was probably the first restoration [in which] we never touched or even saw the actual film.”

Smith’s restoration produced an unfortunate by-product. An actor was hired to double for Robert Morley during African location footage, and he appears in two shots — one in which Morley’s minister character is leading the natives in the singing of a choir, and another in which he’s gardneing. In both shots you can now tell that this guy — his features looking much sharper — doesn’t look a bit like Morley. Not even like his cousin, I mean. It’s a little embarassing. If I’d been in Smith’s shoes I would have CG-pasted Morley’s face on top of the stand-in’s.

I couldn’t help but snicker at Bogart’s line about his “boys” — a pair of ebony-skinned African natives — “moanin’ and rollin’ their eyes” when they sensed danger from the sounds of the oncoming German army. I’m sorry but this description sounds only a step or two removed from one of the boys saying “feets, don’t fail me now!” 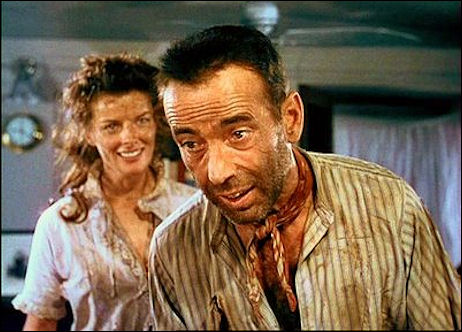