Dollars to donuts Expendables director-writer-star Sylvester Stallone drew the original rough art for this just-released one-sheet. I believe this because I used to indirectly work for Stallone, believe it or not. I was a poorly paid employee of Bobby Zarem and Dick Delson, who were Stallone’s personal p.r. reps during the Rambo II phase in ’85 and ’86. And I saw some conceptual poster art that Stallone had drawn for possible use in the teaser poster. And it had the exact same skull image, only with a bowie knife and a green beret. 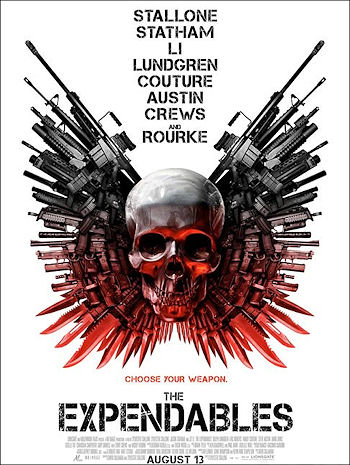 Hey, Tim Palen — am I right or am I right? Stallone roughed it out and your team applied the finishing touches…n’est-ce pas?

Like the poster says, The Expendables, which has no website, will be released by Lionsgate on 8.13.10. We’re all hoping it’ll play during the 2010 Cannes Film Festival. I’m guessing it won’t be part of the regular festival, but market screenings are likely. If this happens, one way or another I’ll get myself in.