Alexandre Philippe‘s The People vs. George Lucas, which in my dreams would (and actually could) be the most emotionally satisfying hit-job documentary of 2010, had its world premiere last night at South by Southwest, and at 6:30 pm yet. And now it’s just after 1 pm New York time the next day and no one has any reviews up. Not Anne Thompson, not Devin Faraci, not Moises Chiullan, not Eric Kohn, not Joe Leydon…no one. 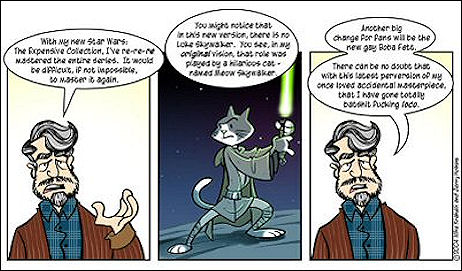 Has anyone even posted a Twitter reaction? Update: Here’s a Hollywood Reporter review by John DeFore.

In this day and age of lightning covering a festival is about lickety-split filing, lickety-split filing and more lickety-split filing. When I see a hot or high-interest movie in Cannes, Toronto or Sundance I’ll post something on that sucker (at least a mini-review) within three or four hours, if not sooner. If I were there you can bet your ass I would have had some kind of People vs. George Lucas reaction up by 10 or 11 pm last night, or certainly by early this morning. All I can say is that I’m very disappointed all around, guys. From here on the T-shirt slogan for SXSW journalists needs to be “fewer Margaritas, faster filing!”