In the view of Marshall Fine, Noah Baumbach‘s Greenberg (Focus Features, 3.19) “is not an audience-friendly film in any sense” and yet “it rewards those who are open to it. You have to work at it to gain access and hang with it, squeezing pleasure and the occasional chuckle out of its bitter beauty where you can. 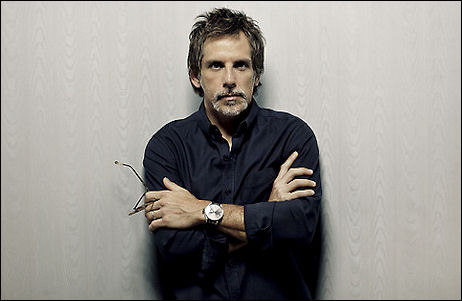 “Prickly, abrasive, fragmented – that describes both Ben Stiller‘s performance as the title character and the film itself.

“Stiller’s Roger Greenberg is a man perpetually dissatisfied with everything about life and the world. As this roughly paced, sometimes jaggedly plotted film moves forward, we begin to see Greenberg for what he is: a miserable, tortured human being who can’t seem to stop broadcasting his pain to others.

“Baumbach has made an uncomfortable but fascinating film, one that could have been comic in an antic or wisecracking way, had he infused it with a little more warmth. But Greenberg doesn’t do warmth — he does pain, anger, longing and self-loathing. And Baumbach wants us to accept him as he is, on his own terms.”

What we have here, I sense, is a fairly intimate reaction on Fine’s part. He seems to recognize the personality and pathology of Stiller’s character. Perhaps (who knows?) as a submerged aspect of himself, or perhaps from a recollection of a family member or a close friend. In any case he’s clearly put off, and yet he recognizes that the film is up to something different — i.e., drilling in close, dealing a straight hand, not going for the intelligent yuks that Baumbach delivered in The Squid and the Whale.

I recognized Greenberg also, partly within my younger, less productive self and partly in the personality of my late brother, Tony. I didn’t find it “entertaining,” per se, but there was no rejecting the film, which I found refreshingly undiluted and stark and uncompromising.

I was especially impressed with Greenberg’s “settling in with the manner and psychology of Stiller’s character without feeling the need to go all ‘story’ on the audience. The humor is so subdued and embedded within situation and milieu that it’s not humor — it’s John Cassevetes-like introspection. I’m obviously saying that with respect.

“Is Greenberg funny? In a LQTM sense, yeah, but to most people LQTM isn’t what they go to movies for. I do, however. I was quietly smirking at Greenberg the whole time, having a quiet little blast with it. And then it grew on me the second time. I didn’t realize how sublime the ending is until I saw it again. That’s my fault.

“Stiller’s performance, in any event, seems to me like a landmark-type thing — a seriously ego-free inhabiting of antsy-quirk neuroticism. Being, not acting, and certainly with any audience comfort-winks. A breakthrough of some kind.”