Don Hahn and Peter Schneider‘s Waking Sleeping Beauty (Disney, 3.26) is a crisply entertaining, well-done, slightly fawning doc about how Walt Disney Co. honchos Michael Eisner and particularly Jeffrey Katzenberg led a team that made profound animation history for roughly a decade — from the time they took over the fairly moribund Disney studios in ’84 until Katzenberg’s resignation in ’94.

During this period Disney released the most successful string of animated feature hits ever seen from any studio before or since — The Great Mouse Detective (’86), Oliver and Company, Who Framed Roger Rabbitt (’88), The Little Mermaid (’89), The Rescuers Down Under (’90), Beauty and the Beast (’91), Aladdin (92), The Nightmare Before Xmas (’93), and The Lion King (’94).

The real hey-hey was closer to a seven year period — ’88 to ’95. In my book it all started with Roger Rabbitt in ’88 and more or less fanned out from there.

Pocahantas, released in ’95, was certainly a product of the Katzenberg regime and the attendant mindset. Toy Story, also released in ’95, was mainly a Pixar show but also rich with the double-tracking mentality that characterized the new-regime Disney classics — kid-friendly but also smart and clever enough to appeal to hip adults.

My two boys were born in ’88 and ’89, and my ex-wife and I were there as Los Angeles-residing parents all through this glory period. We lived it, paid for the tickets and toys and action figures, went to all the films (or rented them all and watched them repeatedly), sang “Under The Sea” with the kids, etc. And this movie brought it all back. A good feeling.

Hahn and Schneider’s doc thoroughly explains how the fortunes of Disney studios were basically in the crapper at the time Eisner and Katzenberg were brought in by Roy Disney. Box-office flops, pessimistic forecasts, etc. “The artists were polarized between newcomers hungry to innovate and old timers not yet ready to relinquish control,” etc. 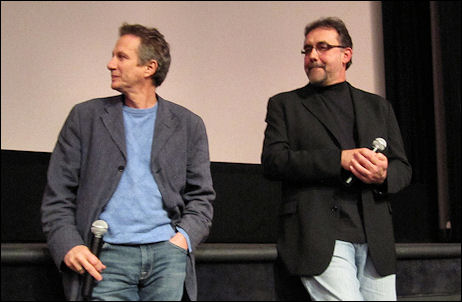 As Alec Guiness‘s Prince Feisal puts it in Lawrence of Arabia, “What we need is a miracle.” And that’s pretty much what happened. The Eisner-Katzenberg run was the most productive, commercially bountiful and accolade-filled period in the annals of 20th Century animation.

Waking Sleeping Beauty was funded by and will be distributed in all media by Disney, but I don’t think it’s fair or accurate to brusquely dismiss it as “a work of corporate self-congratulation,” as Variety‘s Ron Nelson did after the big debut at last September’s Toronto Film Festival.

Disney’s winning streak didn’t just happen — it came about through hard work, heavy talent, bold thinking, creative friction, and particularly strong leadership. And this film does a better-than-decent job of sketching how it happened in nuts-and-bolts terms, and making you feel the emotional ups and downs (as well as the stress-outs and anxieties) that were part of the experience. That’s not a corporate thing — that’s blood, sweat and tears shed by real people.

That said, Waking Sleeping Beauty is a kind of family-friendly, PG-13 version of the saga. I believe that all of life is R-rated, no matter the region or subject or personalities involved, and now and then you can feel Hahn and Schenider stepping back from the more pointed or abrasive aspects of the tale. Both are big-time, Disney-employed veterans of the period being celebrated, and there’s a vested, sanded-down tonality to the film that probably wouldn’t have been there if a couple of renegade outsiders had made it.

There are two amusing anecdotes that everyone in the film business has heard and shared about the hard-driving ethos of the Eisner-Katzenberg era. One was a Katzenberg-alluding remark, allegedly passed along to certain Disney employees, that “if you don’t come to work on Saturday, don’t bother coming in on Sunday.” The other, of course, was the studio being nicknamed “Mouseschwitz.” These lines are funny — I don’t care what you say — and were based on what real people were feeling and sharing back then. And yet Hahn and Schneider don’t mention either one in the doc. 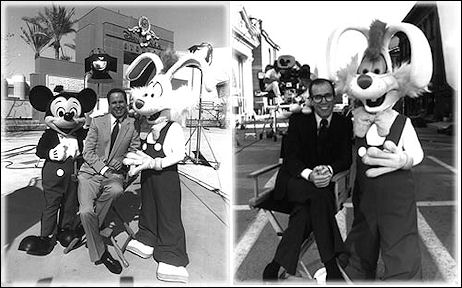 That’s deliberate myopia — i.e., looking to keep their relationship cool with Katzenberg (who probably resents the allusion to Nazi Germany and the Auschwitz concentration camp) or avoid a scuffle with their Disney benefactors. Hahn told me today these lines weren’t mentioned because they’re “well-trod material,” etc., but my son Jett, a Syracuse senior who knows a thing or two, had never heard “Mouseschwitz” and smirked when I mentioned it to him this morning.

It’s also slightly irksome that no one ever just states the obvious cultural currents. There always seemed to be something a little bland and WASPy about Hollywood’s animation community over the decades. To some extent Disney studios seemed to epitomize a certain white-picket-fence suburban culture (Walt Disney himself was from an Irish-Canadian family). But this string began to run out both creatively and business-wise, and it seems derelict not to mention that the Disney empire was saved by a couple of shrewd, scrappy, no-nonsense Jews.

My biggest beef is that Waking Sleeping Beauty doesn’t provide an epilogue — i.e., how the last fifteen years have unfolded in the animation arena and where all the Disney players went to and wound up. Hahn and Schneider don’t mention that Katzenberg co-founded DreamWorks and ran the animation division of that company, or anything about the powerful ascendancy of Pixar, or the ouster of Eisner by Roy Disney, etc.

Hahn told me earlier today that an epilogue was shot and considered, but they decided that the last fifteen years are “nothing you couldn’t find from looking on Wikipedia.” Baloney. Watching Waking puts you into the characters’ lives and heads and the whole animation culture, and you want to know what happened. Sorry, but it’s bad story-telling.

My favorite clip in the whole film is a shot of young Tim Burton working as an animator at Disney sometime in the early ’80s. He was 25 or so at the time, but he looked like he was 17 or 18. The clip got a big laugh.

Waking Sleeping Beauty will come out on DVD next fall, and will include about 85 minutes of bonus material.