The Devil His Due

I’m feeling a certain je ne sais quoi emotional satisfaction with the South by Southwest premiere of Alexandre Philippe‘s The People vs. George Lucas, a takedown doc about a guy I’ve long regarded as the single most demonic figure in the motion picture industry. 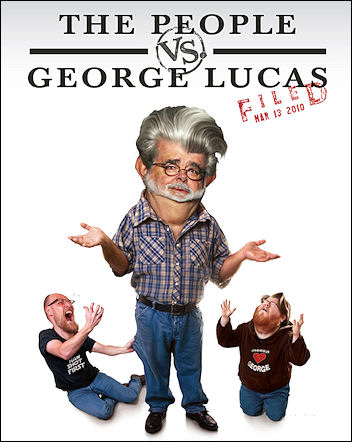 I’ve been calling Lucas a devil figure since the late ’90s, so even if Phillippe’s doc turns out to be so-so it still feels good to have it out there and its central thesis — that Lucas is a very real metaphor for total flaccidifying of directorial chops and a complete corruption of the spirit — presented en masse.

I can remember David Poland cluck-clucking when I called Lucas “the devil” in the wake of The Phantom Menace, which was nearly 11 years ago. And now the world has come around, the sands have shifted and it’s time for Poland to bow down and say “okay, you had a point.”

“George Lucas is not the devil, Jeffrey,” he said. He most certainly is, I replied, in the sense that Albert Brooks called William Hurt “the devil” in Broadcast News. Lucas is an embodiment of evil in that he destroyed his own Arthurian mythology and sacrificed the church of millions of Star Wars believers on the altar of commercialism and Jake Lloyd and Jar-Jar Binks action-figures.

Poland has never been wrong or off-the-mark in his opinions, of course. His psychology, I should say, doesn’t allow for any admissions along these lines. On top of which his “Jeffrey who?” posture has been maintained for years on end so forget it. But I was out there on the battle lines, calling for Lucas’s head when Bill Clinton was still president and assigning all kinds of odious metaphors, etc. And Poland knows this, and he knows that he fairly staunchly defended Lucas and his creations all through that awful Phantom Menace period. I’m not saying he loved the film, but he found a way to say it’s okay and that Lucas had his reasons and rationales.

“Lucas began as Luke Skywalker, and has been described by biographer Dale Pollock as a kind of a brave and beautiful warrior when he was under the gun and struggling to make it in the ’60s and into the early ’70s,” I wrote a couple of years ago. “But once he got fat and successful he slowly began to morph into an amiable corporate-minded Darth Vader figure.”