My initial reactions to the just-revealed official poster for the 2010 Cannes Film Festival are as follows: (a) “I like the monochrome-plus-neon blue, but it doesn’t exactly dazzle. Lacks pizazz. Juliette Binoche‘s expression is supposed to exude serenity or whatever, but it seems sedate and complacent.” (b) “Binoche is the 2010 poster girl because…? Oh, I get it. Because French photographer Brigitte Lacombe asked her. Fine.” (c) “Binoche’s black slacks seem a bit long — should have been finessed by a tailor.” 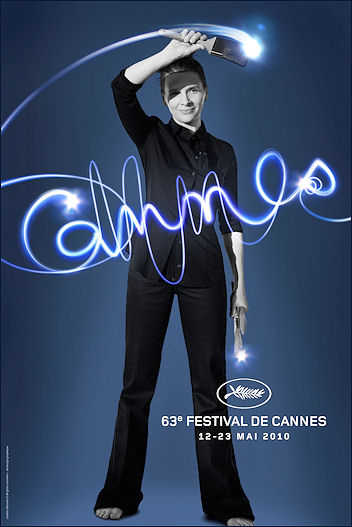 HE reader Andy Smith had the best reaction: “It looks like an ad for Binoche hosting SNL. Or, you know, one of those commercial-break cards they sometimes show during a broadcast.”