To Shake or Shake Not

This isn’t meant as a criticism of Paul Greengrass‘s Green Zone (Universal, 3.12) so I need to put this carefully. Anyone familiar with Greengrass’s two Bourne thrillers will hardly be surprised to hear that this fast-paced Iraq War drama, set in 2003, is visually defined by the aesthetic known as “Paul Greengrass shaky-cam.” 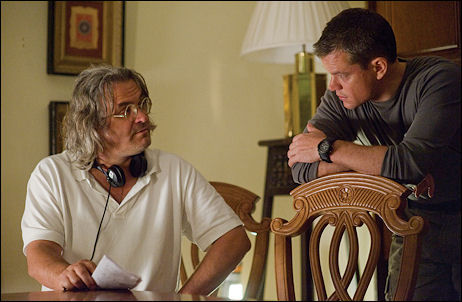 It’s also referred to as crazy-cam, hyper-cam, whirly-cam, jaggedy-cam, whooshy-cam, jackhammer-cam. I loved it in the last Bourne flick, but it bothered me in the second one. (I was primarily bothered by the overly-accelerated cutting.) But I was surprised when I passed this information on to a director friend, and he instantly declared it “passe…a visual fad that has run its course.”

I’m not agreeing or disagreeing with this view. I’m not at all persuaded that PGSC is over. But I was prompted to think back and recall other cinematographic fads have definitely left the room.

I think that the herky-jerky skip-frame cam that was used for the action sequences in Saving Private Ryan and Gladiator is gone for good. I suspect also that the arty bleachy-cam color used for 21 Grams and…I forget which other films but I’m speaking of color that has been bleached to the point of being almost less colorful than monochrome — that aesthetic, I think, is probably not going to return anytime soon. (Or am I wrong?) The high-contrast monochrome bleach look used for Darren Aronovsky‘s Pi is probably history also.

“Paul Greengrass shaky cam” is a very precise and distinct thing. It’s about a bullet-train editing speed and a mad whip-pan wildassery. It was used in the second and third Bourne films, but not in Greengrass’s United 93, which was fast and frenetic but comparatively toned down. Barry Ackroyd‘s cinematography for The Hurt Locker may have seemed similar, but it was a lot steadier in stretches, and not quite as accelerated.

I can reveal that when I realized that Green Zone was another shakycam adventure, I said to myself, “Oh…this again.” This isn’t a slam, mind. I’m just saying that PGSC has become a known quantity.