As Carmichael, a man without a left hand in Martin McDonagh‘s Behanding in Spokane, Christopher Walken is “a scrofulous wonder to behold,” says N.Y. Times theatre critic Ben Bantley. He is “an actor’s actor of fabled eccentricity,” and his “signature arsenal of stylistic oddities has seldom been more enthralling. 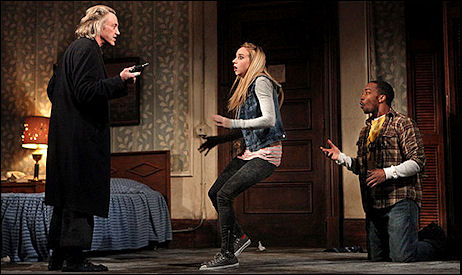 (l. to r.) Christopher Walken Zooey Kazan and Anthony Mackie in Martin McDonagh’s Behanding in Spokane, which opened at B’way’s Schoenfeld theatre on 3.4.

“Some people have become allergic to his familiar panoply of tics and quirks, but seldom does [Walken] only glide on surface mannerisms. There’s highly intelligent method in his madness. Or should we say Method? Mr. Walken is directly descended from Method acting’s most celebrated practitioner, Marlon Brando. And like Brando he has a turn of phrasing that makes even the most generic sentences sound worthy of serious analysis.

“Pauses pop up when you least expect them, entirely shifting the weight of the words around them. Inflections rise upward when normally they would curve down. A single clause can slalom from ennui to anger. These idiosyncrasies of delivery surprise you into close attention and, ultimately, into feeling you can trace the thoughts of the man speaking.

“For Carmichael that train of thought feels singularly lonely, propelled by a logic only he can understand. Variously abstracted and abruptly, frighteningly focused, he is unquestionably a man obsessed. He’s like a small-time, loopier and more selfish variation on the revenge-starved vigilantes played by Charles Bronson and Clint Eastwood.

“But Eastwood and Bronson never let us into their characters’ heads the way Mr. Walken does here. ‘Step into my mind,’ he seems to be saying, as he stammers or curls his lip or blinks catatonically. If Mr. McDonagh hasn’t provided the kind of exhilarating, nasty fun house we have come to expect of him, we are at least allowed to spend shivery time in that shabby, scary labyrinth that exists behind Carmichael’s glassy forehead.” 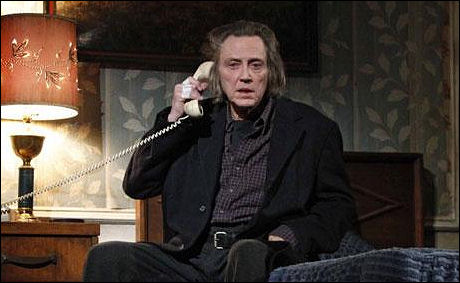