After last week’s Armond White-vs.-Leslee-Dart kerfuffle over his not having been invited to see Noah Baumbach‘s Greenberg, everyone has been awaiting White”s Greenberg review with bated breath. Well, the piece is up — and guess what? White tosses off two or three observations, but he barely “reviews” the film at all. 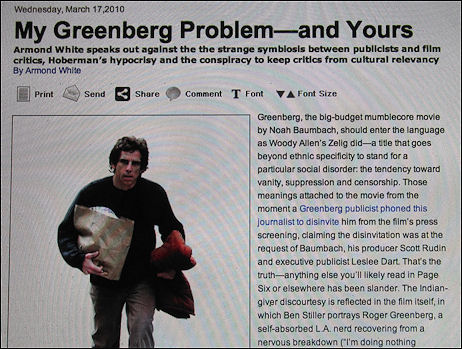 That’s because his ire and fire are mostly aimed at Village Voice critic Jim Hoberman, whom he regards as a small-minded lackey of the imperialist ruling circle of publicists and producers, and 42West publicist Leslee Dart, who kept White away from Greenberg screenings until last week’s brouhaha brought about a reversal.

The interesting thing is that White, a longtime Baumbach hater, almost gives Greenberg a backhanded compliment by calling it “a mite less obnoxious than Baumbauch’s other films.”

White otherwise devotes most of the 20 paragraphs in the article to vivisecting Hoberman for supplying photo-copy proof last Wednesday afternoon that White did in fact suggest in ’07 that his issues with Baumbach might been remedied by “retroactive abortion,” and for doing so for purely venal reasons. And to lambasting Dart, founder of 42West publicity, for being an enemy of free speech and a possible guest on an upcoming segment of the Glenn Beck Show. It goes on and on, and makes for vivid reading if nothing else.

My favorite part of the article notes that Greenberg was “co-conceived with Baumbach’s talented wife Jennifer Jason Leigh, and that in this respect the film continues Leigh’s filmography of masochistic females encountering sadistic males. It’s interesting to watch Greta Gerwig spar JJL-style with Stiller’s Baumbachian prick. I’ll probably be attacked for stating the obvious — that Greenberg seems to dramatize Leigh-Baumbach’s curious relationship — but that’s the film’s only point of interest.”

The last paragraph reads as follows: “This Greenberg problem has had the unexpected effect of unleashing Hoberman’s small-minded vanity. He has such enmity for me he’d rather embarrass his profession than defend it. From his inherited hipster perch at the Village Voice, Hoberman sets a corrupt agenda for the blogosphere’s wannabes. It seems not to matter to these backward children that Hoberman lied and distorted, creating his own WMD. He resents that I am a challenge to his authority; the Hobermanbots fear lively critical dialogue; they all want control. But aspiring critics and mainstreamers won’t make a worthwhile contribution to film culture until they learn to think (and read and see and feel) for themselves.

“Don’t get it twisted: This Greenberg squabble is not about me, it’s about the contempt that the Leslee Darts of this world show toward critics and that Hoberman displays to competition. If they can do this to me, they can do it to you.”