I just sent an important message to a friend who’s going to the Cannes Film Festival for the first time, and I thought I’d share it with anyone else who’s also going but has never been: If you don’t bring an electrical adapter (i.e., adapteur) that looks almost precisely like the one shown in these photos, then you are dead in Cannes. 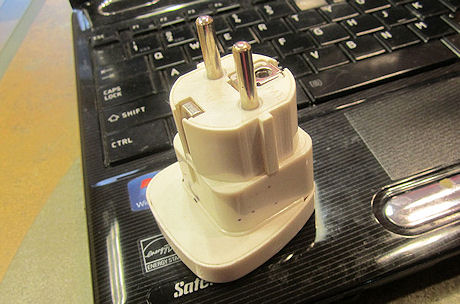 I’m not talking about a power converter, but an adapter. And it has to be the exact same shape because all the French power receptacles in walls and electric multi-plug strips are recessed, so it’s not good enough to just have a converter with those two rounded metal plugs — you need the kind I’ve got here because the rounded white plastic base from which the metal plugs extend fits into the recessed area.

American travel stores will sell you French power converters with the metal plugs sticking out but they’re worthless because they’re flat — lacking a small protruding base as shown here — which prevents the plugs from fitting into the recessed area.

If you can’t score one of these wherever you live in the US you’ll need to go to buy one at FNAC, a big electrical department store on rue d’Antibes, which is more or less parallel to the Croisette. They sell these adapters there. There’s another similar store near FNAC that sells them also. 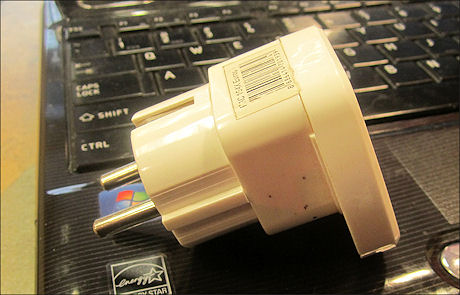 But buy them early. What happens is that people swarm into Cannes on Tuesday and Wednesday, and then quickly realize they don’t have the right adapter because their power converters won’t fit into the recessed power outlets, and they freak out and run over to FNAC and buy up all the adapters. Yes, all of them.

I’ve never known the Cannes FNAC guys to stock up on extra adapters to meet the increased festival demand — a day or two into the festival and they’ve always run out. Every damn year.

April 30, 2010by Jeffrey Wells31 Comments
« Previous post
A Matter of Who and Why
Next post »
Anatomy of a Takedown