Last night I sat through — endured — a good portion of Scot McFadyen and Sam Dunn‘s Rush: Beyond The Lighted Stage, which will play the Tribeca Film Festival on 4.24. I wanted to leave right away but I stuck it out for an hour. It reminded me of a decision I made after listening to a couple of Rush tracks in the mid ’70s, which was to never listen to anything by these guys again — ever. 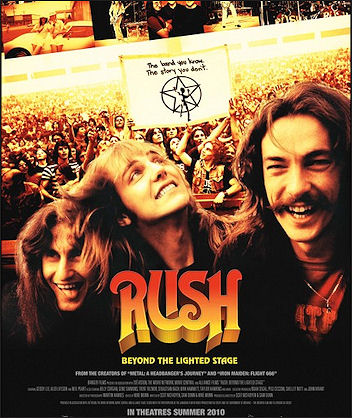 Rush: Beyond The Lighted Stage is a fairly dishonest film in that McFadyen and Dunn, friends of this long-running Canadian rock band, make an effort to persuaded uninitiated viewers that Rush is a respected, generally admired group that makes reasonably engaging music.

Respected and admired as this trio may be in certain perverse circles, they’re a deeply unpleasant band to listen to, or watch even. The fact that they’re especially big in Middle America should tell you a lot. Their music is shrill, excruciating, repellent, un-catchy, and about as un-melodically melodic as anything I’ve ever heard. They make you want to leave the room and run as fast and far as you can.

Lead singer and bassist Geddy Lee‘s high-pitched voice, especially, is a demon wail of an epileptic cat with cancer — a banshee on helium. And Rush’s lyrics strike me (and would strike anyone) as poetic sci-fi fantasy-visionary babbledygook glop-slop. Plus they’ve been into Ayn Rand and call/have called themselves Libertarians? Which means what…they have a soft spot for this or that aspect of conservatism on top of everything else?

The doc is decently made — I’ll give McFayden and Dunn that. But Rush dispenses pain. They’re among the most loathed bands of all time by the measure of most respected rock critics. I could take and even half-enjoy Anvil’s music, but not Rush. And yet they’ve been going since the late ’60s, and have millions of true-blue fans. Go figure. All I know is, the time I spent with this doc last night was a minus experience. It took from me and left me with less than what I had when it began.