Bloke in the Hood

Russell Crowe is credited as co-producer of Robin Hood (Universal, 5.14) alongside Brian Grazer and director Ridley Scott, and is nothing if not proud of the on-screen result, writes the Sydney Morning Herald‘s Peter Fitzsimons. 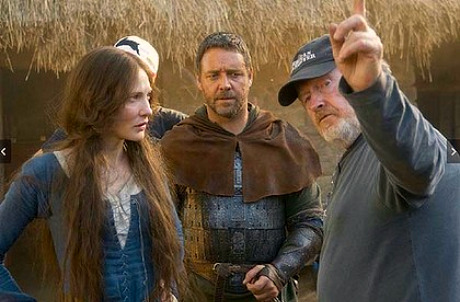 “So proud that this will be the first of his many films that he will allow his sons, Charlie and Tennyson, to watch. ‘I think it would be confusing for them to see me in films, just as it is confusing for them to see people stop me on the street and ask for autographs,’ Crowe says. ‘But I want them to see this one. Really, all kids have gotta see Robin Hood. It is important to grow up with that thing in your mind.'”

A concept, he means, of a “really normal” fellow with an aptitude for exceptionalism.

In short, Robin Hood is not a film for the likes of Newt Gingrich, Sarah Palin, Michelle Bachman, etc. For Robin Hood is about nothing if not a certain economic fairness, the redistribution of wealth, forcing the moneyed elite to do the right thing by society’s lessers. Sounds an awful lot like socialism to me!