This is probably the classiest and most generally appealing one-sheet of the year so far, and it had better be that, given what it’s selling. Debra Granik‘s Winter’s Bone, which I caught at Sundance 2010, is a straight, earnest and well-honed backwoods tale…but occuring within a grim and scuzzy atmosphere. Joe Popcorn is going to take one look and say, “I work hard all week for insufficient pay at a place I don’t like, and then I’m supposed to watch this when I want to be entertained?” 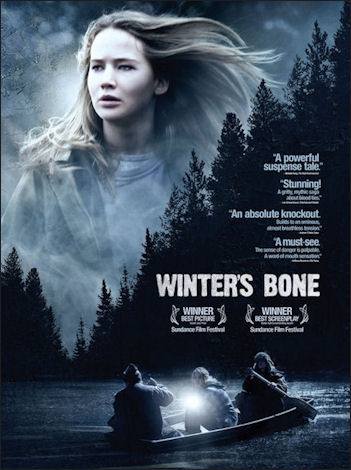 Aside from Jennifer Lawrence, who plays a steel-backboned 17 year-old trying to fend for her family as he tries to locate her errant father, every setting and character in Winter’s Bone has that weathered, dog-eared Ozarkian quality. Everyone has bad teeth or grayish skin or ugly half-gray beards, and they’re all sucking on cigarettes and wearing grimy clothing. I sat there imagining what torture it would be to live my entire life with these toothless hee-haws, and how heroin addiction might seem like a pleasant thing under such circumstances. It’s a decently made film but not as compelling as Granik’s Down To The Bone. I knew I was watching a sturdy honest effort with good dialogue and always-believable performances, but it was all I could do to get through it.