Why did BBC guy Stephen Robb post a 50th anniversary piece on Alfred Hitchcock‘s Psycho (“How Psycho Changed Cinema“) on 4.1.10 when the film opened during the summer of 1960 — in Manhattan on 6.16, in England on 8.4, and in Los Angeles on 8.10? Not a huge deal but why not at least wait until June? 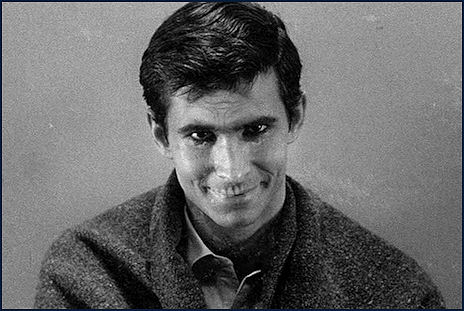 It’s probably impossible for 21st Century horror fans to understand what an astonishing jolt Psycho was to the complacent and certainly constipated middle-class American movie culture of 1960. Back then a shot of a toilet had reportedly never been seen in a film, much less footage of a toilet being flushed. (Heavens!) But I’m pretty much tapped on this film, to be honest. Too much has been written and commonly digested for anything new to be said.

It’s just a movie, as Hitchcock might have said, and not the Arc of the Covenant. Shot with for a price with a TV crew, and much of it on the Universal back lot, and with John Gavin‘s stiff acting mucking things here and there.

I can only savor Psycho now for (a) the wonderful visual economy in the story-telling, (b) elements containing those creepy allusions and intimations of horrible stuff to come, and (c) the way the dialogue in the parlor-snack scene between Janet Leigh and Anthony Perkins specifically forecasts the entire last-twelve-minute payoff.

(a) The last frames of that final shot of Tony Perkins when his mother’s rotted skull and teeth begin to blend in. Shown for only an instant — that’s the charm of it.

(b) The look on California Charlie’s face when Janet Leigh agrees to pay $700 plus her 1956 Ford in a trade-in for a slightly newer used car. 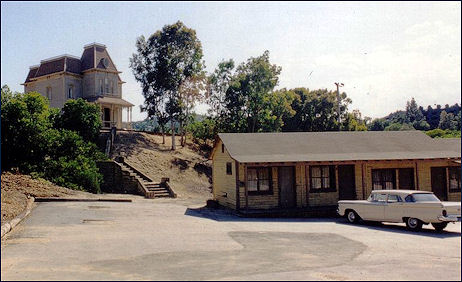 Original Psycho set on Universal back lot. (Snap taken in 2009.)

(c) That long shot, taken from the POV of a rain-dampened Leigh, of a silhouetted Perkins walking in front of a second-floor bedroom window, “playing” his mother in a dress with a cheap wig. First-timers don’t know what they’re seeing, but the shot is quite creepy if you’re back for seconds.

(d) “You know what I think? I think that we’re all in our private traps, clamped in them, and none of us can ever get out. We scratch and claw, but only at the air, only at each other, and for all of it, we never budge an inch.” (If this isn’t a dead-on description of the psychology of Glenn Beck, I don’t know what.)

(e) The shot of the ragged stuffed bunny on the bed, and the close-up of the 78 rpm of Beethoven’s “Eroica.”

(f) Martin Balsam‘s scene with Perkins in the motel office, and the way he gently prods at Perkins’ easy-to-spot fibbing. “Wanna check the picture again?” “Look, I wasn’t lying to you, mister. It’s just…” “Oh, I know, I know!” 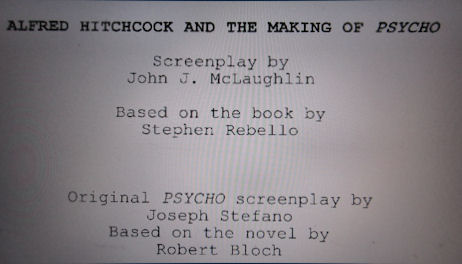 (j) “I couldn’t do that. Who would look after her? She’d be alone up there. The fire would go out. Cold and damp like a grave. If you love someone, you don’t do that to them, even if you hate them. People always call a madhouse ‘some place.’ Put her ‘in some place.’ Have you ever seen the inside of one of those places? The laughing and the tears, and the cruel eyes studying you? My mother there? But…but she’s harmless! She’s as harmless as one of those stuffed birds.”

Whatever happened to Alfred Hitchcock Presents, the making-of-Psycho feature that Ryan Murphy was supposed to direct with Anthony Hopkins as Hitchcock? Obviously delayed if not shit-canned, but I wonder why. I still have my copy of John J. McLaughlin‘s script, which is dated 6.16.06.

As I mentioned in a 3.18 Eat Pray Love piece, it took Murphy “three years to get out of movie jail after Running With Scissors,” so I’m guessing it was at least partially Scissors that pushed the Hitchcock project into the swamp. Too bad. Hopkins would have been good.

At least there’s Chase Palmer‘s Number 13, that currently shooting British production about young Alfred (played by Dan Fogler, for God’s sake) making his unfinished first film, Number Thirteen, in 1922 while “getting caught up in a Hitchcockian dilemma when he ends up in a love triangle with two crew members while making the film,” etc.