A friend mentioned last night that one of the most intensely desired Blu-rays is Stanley Kubrick‘s Barry Lyndon. Intensely so for its curious absence, and intensely so for months, years and decades after it’s released, I’m sure. Everyone will have to own the most precisely rendered and visually faithful digital version of one of the 20th Century’s most admired near-great films. 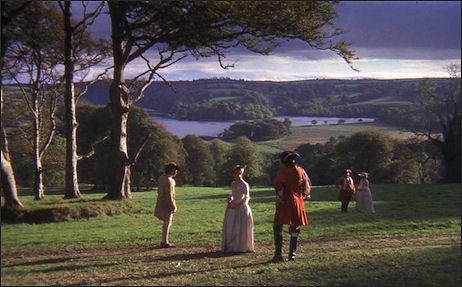 Nick Kostopolous posted the following on The Auteurs about eight months ago: “The only reason Barry Lyndon hasn’t yet made it to Warner Home Video Blu-ray is that the elements need re-mastering for the format. Because of the way the film was shot, w/its ultra-sensitive lenses & low light levels, the film poses a real challenge to master for hi-def.

“Trust me, it’ll eventually come out — it’s just a matter of time. Warner Bros. doesn’t license disc rights to the films they own to outside companies like Criterion; they feel they can do the job fine themselves, so sit tight.”

Well, here it is eight months later and no Lyndon Blu-ray. Please don’t tell me WHV is waiting to release a 40th anniversary Blu-ray in 2015….please.

Warner Home Video’s Ned Price and George Feltenstein would be well-advised to present the Barry Lyndon Blu-ray in a 1.66 to 1 aspect ratio…or else. No 1.85 to 1 crap for this masterpiece. My understanding is that Kubrick actually protected the framings for a 1.37 to 1 presentation on television, but the important thing to keep in mind is that 1.66 to 1 approximates the aspect ratio of many if not most 18th Century portraits and landscapes, which is precisely the effect that Kubrick was going for — a feeling that you were watching the Lyndon story through a prism of old paintings of the period. 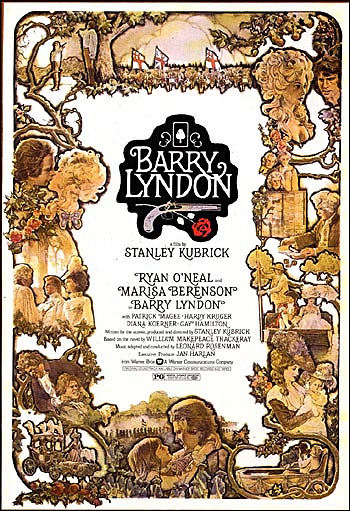 Yes — “near great.” I still maintain that Lyndon, which I saw again last week, is not 100% masterful. I explained my reasoning fairly thoroughly in an article I posted nearly three years ago. Here’s a relevant portion:

“I’ve seen Barry Lyndon at least fifteen times. Possibly a bit more than that — I’ve lost count and who cares? It’s brilliant, mesmerizing, exquisite — a dry, note-perfect immersion into the climate and mores of William Makepeace Thackeray‘s novel, and, by its own terms, one of the most perfectly realized films ever made. But the problem — and this needs to be said (or re-said) with all the passionate but vaguely snobby Lyndon gushing going on these days — is that it turns sour at a very particular point.

“And, in my eyes, Barry Lyndon is just a notch below great because of the dead zone section in the second half.

“I’m speaking of the moment when Barry (Ryan O’Neal) blows pipe smoke into the face of his wife, Lady Lyndon (Marisa Berenson). Something happens at that moment, and from then on it’s ‘oh, odd…the energy is dropping, and I’m starting to enjoy this less.’ For another 30 to 40 minutes (or what feels like that amount of time), Barry Lyndon gets slower and slower, draggier and draggier, more and more morose — stately compositions, dispassionate observation, grim-faced tableaus.

“Then, finally, comes the duel with Lord Bullington (Leon Vitale) and Barry gets his groove back. Then comes that perfect, dialogue-free scene with Lady Lyndon signing checks with Bullington and Reverent Runt at her side, and she signs the annual payment to her ex-husband. And finally, that perfect epilogue.

“There’s one other draggy component that diminishes Barry Lyndon, and in fact makes the dead-zone portion even deadlier than it needs to be, and that’s Berenson’s performance. Even now, the mere thought of her glacial expression — there’s only one — in that film makes me tighten with irritation.” 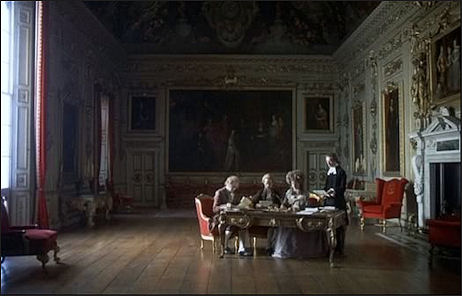 In all candor and compassion, the following 2006 Slant article by Matt Zoller Seitz (“They Are All Equal Now”) doesn’t really face up to the “dead zone” issue, which is why it’s very nearly a great piece, but not 100% so

“Barry Lyndon is perhaps Stanley Kubrick’s most uncompromising work, in the sense that of all his films it offers the least of what we’d call ‘entertainment value.’

“It’s not as raucous and cruelly funny as Dr. Strangelove and A Clockwork Orange, or awesomely chaotic as Full Metal Jacket or as cleverly structured as The Killing. It has a sense of humor, but it’s so slyly sharp — like a needle made of ice — that the film’s jokes register as tremors of discomfort. It’s the hardest of hardcore Kubrick, so hermetic that it makes 2001: A Space Odyssey seem embracing.

“At least 2001 offered audiences spectacular sci-fi vistas they had never seen before [whereas] the main innovations of Lyndon, besides John Alcott‘s justly praised, candlelit interiors, lie in the way the story is told.

“The director’s methods are so precise, so intelligent, and to this day, so necessary, that I consider the film his greatest achievement — a Kubrick film that takes a more cosmic view of humankind’s folly than any other, including 2001; a clinical epic which deliberately puts a vast chasm of identification between the characters and the viewer, a chasm which must then be bridged through sheer willpower and empathy.

“But if you stick with the movie, if you make the effort to cross that chasm, the effort is well worth it. If you adapt to Kubrick’s particular storytelling syntax and give yourself over to his detached tone, you find yourself thinking about the human race in a different way, not as a collection of individuals or nations, but as a species — as animals in clothes, animals who are mainly interested in survival and the accumulation of resources, animals who have the capacity to reason but don’t use it as often as they should, but who feel the loss of loved ones and the dashing of their own hopes as acutely as any creature, perhaps more so.

“Once you’ve hit that stage of perception, suddenly the film stops seeming cold and becomes intensely moving, because the tragedy of Sir Redmond Barry and his wife and their immediately family has become everyone’s tragedy in microcosm.”