The Criterion DVD of Sidney Lumet‘s The Fugitive Kind arrives on 4.27. DVD Beaver‘s Gary Tooze says “the image looks good although not always stellar. I suspect it is as strong as the source elements will allow and probably what held it back from going Blu-ray.” 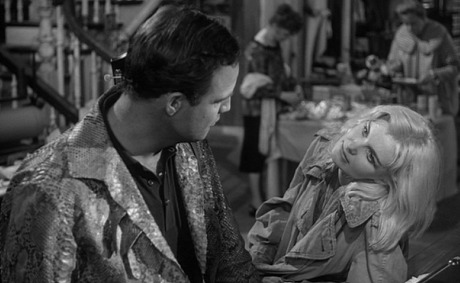 I would written something myself but a screener never arrived, despite my having received them from Criterion’s NY rep over the last couple of years.

“Criterion’s first disc shares the feature film with nothing else — not even a trailer — so the bitrate for the 2-hour film is very high,” Tooze reports. “It looks somewhat lighter and the softness appears to be inherent. The audio is mono — unremarkable but clean and clear. Criterion offer optional English subtitles.

“The new DVD is stacked with a second, dual-layered, disc starting with a 1/2 hour video interview with Lumet recorded for Criterion in 2010. He talks with passion and understanding about his career, the actors and especially Tennessee Williams. There is another half-hour piece entitled Hollywood’s Tennessee and The Fugitive Kind with R. Barton Palmer and Robert Bray supplying rich information about the lauded playwright.

“We also get three 20-minute one-act plays by Tennessee Williams from 1958, directed by Lumet and starring the likes of Ben Gazarra and Lee Grant, among others. Video quality is kinescope style and expectantly poor. Lastly, there is a 20-page liner notes booklet featuring photos and an essay by film critic David Thomson.”