Three months after Rob Epstein and Jeffrey Friedman‘s Howl screened at the 2010 Sundance Film Festival, a distribution deal has finally happened. Oscilloscope will release this absorbing semi-documentary in theaters and VOD on 9.24.10. Howl is quite an original thing — an instructive education as to the meaning of Allen Ginsberg‘s legendary poem. I was really glad I saw it. Why did it take so long to cut a deal? 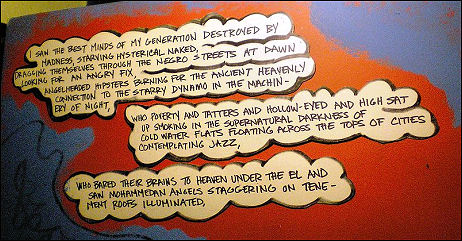 On 1.21 I called it “an indie, artsy, half-animated dream-cream movie that’s basically an instructional primer for the uninitiated about what a wonderfully seminal and influential work Howl was and is.

“It’s brisk, condensed, in some ways florid, engaging, intellectually alert and stimulating. You know what this thing is? It’s a gay Richard Linklater movie, only deeper and more trippy. It’s an half-animated exploration thing that contains scenes of actors reading and ‘being,’ but in no way is this a movie that plays like a movie. It’s something else, and that’s a good thing for me.

“Howl is a ‘small’ film, but it’s rather wonderful and joyful in the particulars.

“Howl is not a narrative feature — it’s a near-documentary that says ‘stop what you’re doing and consider what a cool poem Howl was…in fact, let us take you through the whole thing and show and tell you how cool and illuminating it is.’ It uses Waltz With Bashir-like animation to illuminate what Howl was in Ginsberg’s head when he wrote it, and what the poem’s more sensitive readers might have seen in their heads when they first read it.

“James Franco ‘plays’ Ginsberg quite fully, particularly and well — he gets the slurring speech patterns and pours a mean cup of tea as he’s explaining a point to a journalist — but Franco, good as he is, is subordinate to (or should I say in harmony with?) the basic ambition of the film, which is to inform, instruct, awaken, turn on.

“For me, Ian McKellen‘s ‘Acting Shakespeare’ was a somewhat similar experience — an accomplished British actor explaining and double-defining the joy and transcendent pleasure of performing, feeling and really knowing deep down what Shakespeare’s poetry really means, and has meant to him all his life.

“I’ve read Howl one a half times, but only now do I feel I really know it.”