There are basically two kinds of moviegoers. The first will go to Noah Baumbach‘s Greenberg, not like it, get up after 45 minutes in and say to the manager “I want my money back!” This same kind of person will go to Shawn Levy‘s Date Night, laugh and stomp and go “hee-hee-hee” and “yeahhh!” 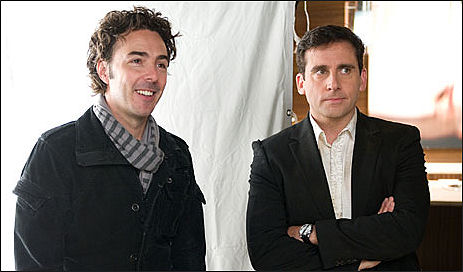 The second kind will go to Date Night and experience a slightly different reaction. He/she will quickly realize he/she is stuck watching another mildly tolerable high-concept comedy with soul-numbing car chases and gun-wielding baddie-waddies, and try to cheer him/herself by cherry-picking the few bits and lines that are semi-funny by saying “hey, that wasn’t bad…that was a decent improv…if only Tina Fey and Steve Carell could costar in a film with decent material.” And then walk out of the screening room relieved but vaguely depressed.

The first kind represents, I’d say, between 85% and 90% of moviegoers. The second kind obviously represents persons like myself.

I don’t know which group Variety‘s Lael Lowenstein belongs to, but her having recently called Date Night “an uncommonly engaging date movie with action, edge and genuine chemistry between its leads…a home run” calls her judgment and taste buds into question. In a perfect world there would be a special District Attorney with the power to indict certain critics for writing outrageously incorrect (i.e., overly fawning or overly dismissive) reviews. If I was Mr. D.A. you can bet Lowenstein would be hauled before a grand jury.

Date Night, yes, has its moments. Left to their own improvisational devices, Fey and Farrell are obviously bright and inventive and even “funny” here and there. It’s not a “terrible” film, but I just sat there like a lump of mashed potatoes this morning — patient, immobile, looking at my watch every so often, half-frowning, waiting for it to be over. It carries the Shawn Levy virus, you see, and if you’ve seen the Night at the Museum flicks, Just Married, Cheaper by the Dozen and The Pink Panther you know what that means, and more particularly how it feels to submit to it.

Don’t let Levy’s smiling face in the above photo fool you. He’s obviously doing very well in life, but serious movie hounds despise him. He must realize by now that he’s trapped in a wonderfully affluent studio-funded hell of his own making. He’ll never make anything as good as Little Miss Sunshine or Flirting With Disaster. If Levy was to get hold of the “cheaters” and put them on in front of his bathroom mirror, look out.

And yet Levy deserves credit for at least keeping Date Night down to 88 minutes.

The goal here could/should have been to make another After Hours, the dryly subversive Martin Scorsese comedy with a similar premise, but that wouldn’t have been as Eloi-friendly as Date Night, which will do pretty well commercially, I expect.

I loathe movies with pistol-packing, slickly-dressed, slightly fungusy-looking bad guys who do three things and three things only — threaten-and-glare, shoot at the good guys, and chase them in cars. The Date Night offenders in this regard are Jimmi Simpson (who played one of the vicitms in Zodiac) and Common, a rapper-shmapper.