Remember the old resemblance aesthetic that used to carry weight in Hollywood circles? The one that said actors cast as famous historical figures had to sorta kinda resemble the Real McCoy? Which is why Henry Fonda and Raymond Massey were chosen to play Abraham Lincoln, respectively, in Young Mr. Lincoln and Abe Lincoln in Illinois? And Charlton Heston was cast as Gen. Andrew Jackson in The Bucaneer? And blue-eyed Jeffrey Hunter was cast as Jesus Christ in King of Kings? You know…actors you could physically half-buy in these roles? 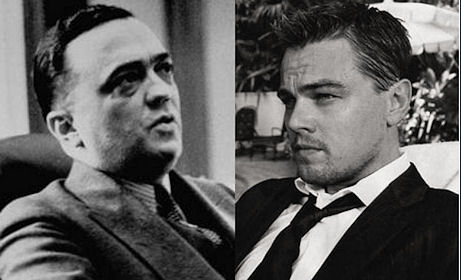 That system is totally out the window with Leonardo DiCaprio reportedly talking to Clint Eastwood about playing J. Edgar Hoover in a Universal-funded biopic.

Billy Crudup playing Hoover with a mincy British accent in Public Enemies was bad enough, but this? Hoover was short (5’7″) and thick with a jowly bulldog face — he had a stern, weathered, middle-aged look when he was in his early 30s. DiCaprio is tall (around six feet) and broad-shoulder with Nordic-Germanic features, and will look like a guy in his late 20s or early 30s when he’s 45 or 50, if not older.

Not only is there zero resemblance between the two. DiCaprio-as-Hoover is so outrageously wrong that it’s almost like an insult joke directed at ticket-buyers. It’s almost as if the filmmakers are saying, “We can cast anyone we want as Hoover. We don’t care what you think about resemblances because we make the movies and you buy the tickets. You think DiCaprio is wrong for Hoover? You haven’t seen anything yet. We’re thinking of casting Jerry Seinfeld to play Thomas Alva Edison next, and then we’re going to get Christopher Mintz-Plasse to play Joe Namath. You don’t like this? Suck on it.”

Nikki Finke reported yesterday that the script by gay screenwriter Lance Black (Milk) will “[peel] back the curtain on the life of Hoover.” Meaning, of course, that the film will probably punch up the allegedly gay undercurrent in Hoover’s private life, particularly regarding his relationship with longtime amigo Clyde Tolson. Something tells me the old-school Eastwood won’t want to delve too deeply into this aspect but Black’s script (which I’d love to read if anyone has a copy) almost certainly deals with it in a fairly up-front way.

All I know is that I’m having a lot of trouble imagining DiCaprio dressed in “a fluffy black dress with flounces and lace, stockings, high heels and a black curly wig,” which is how Hoover was allegedly described on a certain occasion by society lady Susan Rosenstiel, as reported in Anthony Summers‘ Official and Confidential: The Secret Life of J. Edgar Hoover.