The South by Southwest reactions that I read about Matthew Vaughn‘s Kick-Ass (Lionsgate, 4.16), which I saw last night, buried the lede. The star of this almost sociopathic comic-book actioner isn’t Aaron Johnson, who plays Dave Lizewki, the lead character who invents a faux-super hero called Kick-Ass. The star is Chloe Moretz, the 13 year-old who plays Hit Girl. 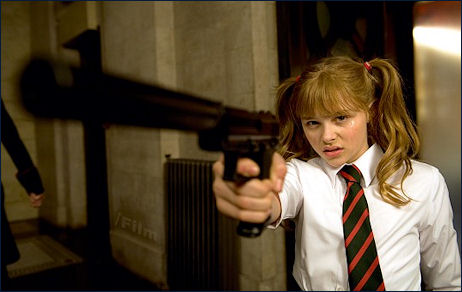 Moretz, who’s 5′ 2″ but looks smaller in the film, actually plays Mindy Macready, the daughter of an angry but amiable vigilante named Damon Macready (Nicolas Cage). Hit Girl is Mindy’s purple-wigged alter-ego when she and dad (in the guise of a Batman-ish figure called Big Daddy) go on crime-bashing rampages.

Johnson’s character seems too wussy, too “gee-gosh,” too intimidated by everything. He looks scared or amazed all the time, and his mouth is always hanging open. But Moretz is the shit. She’s got spunk and sass and vertebrae of steel. And she’s not compromised by the fact that her Matrix-like fighting skills and multiple triumphs over able-bodied, full-grown men (particularly during the finale) are completely ludicrous. What matters is that Moretz has the character and personality of a super-tough chick who doesn’t mess around. Presence, conviction, charisma…got ’em all. 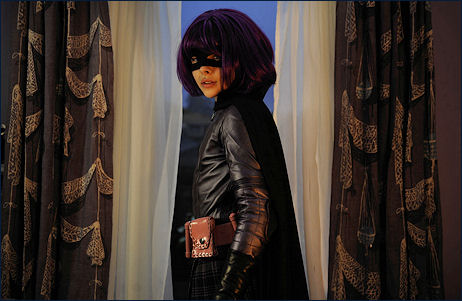