There’s a Christina Hendricks clone on the cover of the current Esquire, and also in a photo spread inside (or at least on esquire.com). I don’t know the cause — radical diet, plastic surgery, Photoshop — but she’s definitely not the actress I’ve seen in Mad Men. Her particularity has been chiselled and scrubbed down and made to seem less particular, more generic. She could be any hot-bod Maxim babe. 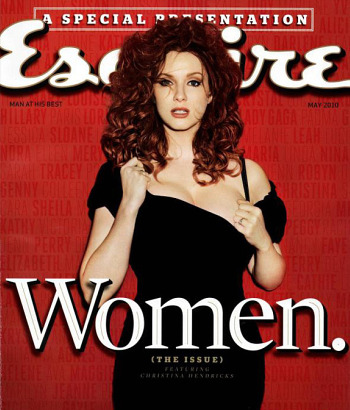 In a 1964 Twilight Zone episode called “Number 12 Looks Just Like You,” creator Rod Serling recited the following intro: “For want of a better estimate let’s call it the year 2000. At any rate imagine a time in the future in which science has developed the means of giving everyone the face and body he dreams of. It may not happen tomorrow, but it happens now — in the Twilight Zone.”

“But is that good?,” Collin Wilcox‘s Marilyn Cuberle asks Richard Long‘s Dr. Rex. “Being like everybody? I mean, isn’t that the same as being nobody?

To which Dr. Rex grins and says, “I think it’s time you tell me where you’re getting these radical ideas.”