Intrigued by the news (via a Jon Favreau tweet) about Harrison Ford being cast in Favreau’s Cowboys & Aliens, I flipped through 100 pages of the online version of the original graphic novel, looking for an Uncle Festus character whom Ford might play. 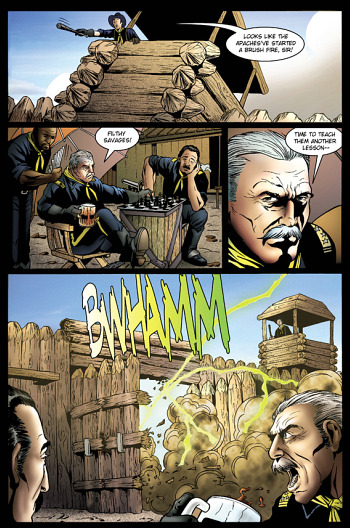 Ford would have played Zeke Jackson if the film had been made in the early to late ’80s, but this ain’t the early to late ’80s. (Daniel Craig has the part.) I haven’t read a recent draft of the script, but the only guy in the comic whom Ford could possibly play is a 60ish U.S. Cavalry Colonel who refers to Native Americans as “filthy savages” and is soon after wasted by the aliens. A cameo, in short — two or three minutes and hasta la vista.

Cowboys & Aliens “begins with a nice prologue comparing the European invasion to an alien invasion,” a Bluecorn Comics summary begins. “For Indians, that’s just about what the European invasion was. Between guns, germs, and steel, they had no idea what hit them. They learned fast, but that wasn’t enough to stave off eventual defeat.

“But the comic immediately subverts this message with the main story, which opens with…I kid you not…an Indian attack on a wagon train. Most of your basic Native stereotypes quickly appear. The Indians are Apaches…riding horses…with a Plains-style chief…half-naked braves…and a ‘shaman.’

“The Indians have no culture or religion other than dancing around a fire before a big fight. The text refers to them ironically as ‘savages,’ but the story portrays them as actual savages.

“Apaches on horseback attacking a wagon train at the behest of a chief in a warbonnet? Taking place ‘in and around Dodge City, Kansas, just after the Civil War’? Um, I don’t think so.

“In other words, a hundred times zero is still zero. You do the math.

“There are only a few saving graces. One, the Indians live in wickiups rather than tipis, which is the only accurate cultural note I saw for a supposed band of Apaches. Two, a few of their names aren’t stereotypical. Three, the Indians learn the alien technology as quickly as the whites do. And they’re just as quick to cease hostilities and join with their fellow humans against the bad guys.

“Both the story and art are unsubtle and (to me) not especially interesting. I’d say Cowboys & Aliens is more for younger, action-oriented readers than adults. Save your money and read it online instead.”