Stephen J. Whitty‘s 4.4. piece about the Film Forum’s four-week series on newspaper films (4.9 through 5.6) alerted me to the fact that Jack Webb‘s -30- (1959), a wise-cracking but grossly sentimental ensemble newspaper drama, hasn’t been included. 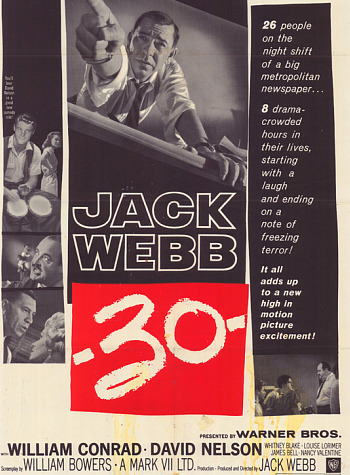 This is perhaps due to curator Bruce Goldstein‘s inability to find a decent print, or maybe because he thought -30- just isn’t good enough. I wouldn’t argue with him. I saw it 20 or 25 years ago on the tube, and it’s definitely a flatly-mannered, heart-tugging Webb confection through and through.

But it does serve up a heaping assortment of late 1950s-era newspaper characters (although they seem part of a much earlier era), and the whole thing does occur in a newsroom, start to finish. So if the idea of the FF series is to taste the atmosphere of a dying industry when it was thriving and vigorous, -30- certainly delivers that.

The other thing is that -30-, a Warner Bros. film, doesn’t exist anywhere — not on the Warner Bros. archives site, not on DVD, and only from second-hand sources on VHS.

Update: It turns out that -30- is buyable/rentable on iTunes. I didn’t spot it because iTunes is calling it Thirty. 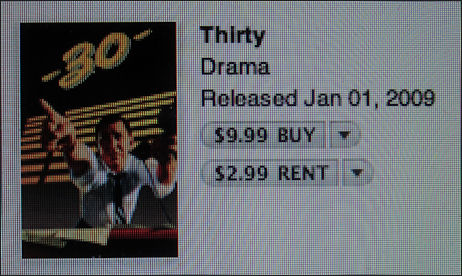