The TCM Classic Movie Film Festival begins tonight in Hollywood with a screening of a restored, mostly complete version of George Cukor‘s A Star Is Born. This is the 176-minute version of the Judy Garland-James Mason drama-with-music (as opposed to an actual “musical”) that Ron Haver assembled in 1983, and digitally restored to a fare-thee-well. Warner Home Video will release a Blu-ray version on 6.22.10. 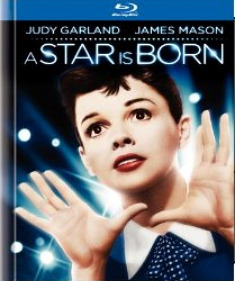 The original length of Cukor’s film, seen at an early preview screening in Huntington Park, California on 8.8.54, was 196 minutes. A day after a second preview two scenes totalling 15 minutes were deleted, resulting in a version running 181 minutes. The general release version was trimmed further to 154 minutes. Haver’s semi-restoration was basically the 181-minute version minus five minutes of footage (substituted for with a montage of black-and-white stills) for a running time of 176 minutes.

Please note that the Amazon page for the forthcoming Star Is Born Blu-ray is incorrect in two ways: (a) it says that the running time is 154 minutes instead of the actual 176 minutes, and (b) it says the aspect ratio of the film is 1.77 to 1 despite the film having been shot and presented in the ultra-wide 2.55 to 1 CinemaScope process.

L.A. Times reporter Susan King ran a piece today about the TCM Festival, and spoke to WB senior vp George Feltenstein about A Star Is Born.

“What Ron Haver did was basically to reconstruct the film to the best of his ability,” Feltenstein tells King. “But at that time there wasn’t a digital restoration of the film itself.’

“Because of the flaws with early CinemaScope lenses, the original negative had jumps at the end of every splice. And the movie was turning red because the yellow layer of the Eastman color stock was fading.

“Because Warner is releasing the film on Blu-ray in June, it was imperative that the film be restored. ‘It has taken over 2 and 1/2 years,’ Feltenstein says. ‘You are dealing with a very long film and an enormously complex piece of film.'”

Can I say one thing that no one ever seems to bring up? Judy Garland was born in June 1922, and was between 31 and 32 years old when she made A Star Is Born. That’s fairly young in my book, but she looks closer to 40 in the film, certainly by today’s standards. She certainly doesn’t look like a young actress-singer just starting out, which is what Esther Blodgett is supposed to be. She looks stressed, worn down and plain with a too-short haircut and her chin starting to disappear — there’s a straight line between the tip of her chin and the base of her neck. Garland had lived a tough life up that point, and it didn’t get any more peaceful. She died in 1969 at age 47 — barely into middle age.