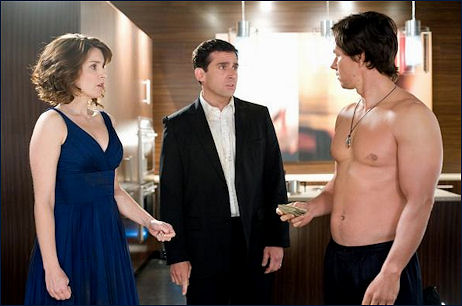 But The Hollywood Reporter‘s Frank Sheck says pic “sadly illustrates the current disparity between television and big-screen comedy…[Carell and Fey] star in two of the wittiest, most sophisticated sitcoms on the air, but…they’re stuck with an endlessly silly plot line and overblown physical mayhem that is instantly forgettable.”

Hmmm, “home run” or “instantly forgettable”? Who to trust in a situation like this? I’m sorry but a voice is telling to be wary of Lowenstein. This is a Shawn Levy film, after all.

Lowenstein says that Carell and Fey, “playing a suburban couple whose evening out goes disastrously wrong, are ideally suited both to each other and to the material.”

And yet she also says “pic’s domino-style series of spontaneous adventures, gallery of unsavory characters and brushes with peril suggest a lesser version of the nocturnal black comedies After Hours or Into the Night.” But then she suggests Date Night‘s shortcoming in this regard is primarily due to its PG-13 rating.

“That’s a little too bad, as it would be fun to see where Fey and Carell could really go if let loose, and if Date Night had even further embraced its edginess,” she remarks. “Nevertheless, it’s a date worth making.”

Sheck agrees with Lowenstein about what Carell and Fey bring to the table. “Displaying an unmistakable chemistry together, they give the film its entertainment value, [and] not the overblown car chases and shootouts. If they could make this sort of routine premise work as well as it does, imagine what they could do with really inspired material.”