What was shocking or envelope-pushing three or four decades ago isn’t any more, or so we tend to think. But imagine this scene in a 2010 remake of Ken Russell‘s Women in Love with, let’s say, George Clooney and Matt Damon. Or with Johnny Depp and Leonardo DiCaprio. Difficult, isn’t it?

The scene is fascinating, I feel, for the way it skirts the edge of homoeroticism without ever quite going there, but in today’s climate would it even be shot? Would a producer, I mean, be able to fund a remake? You know that today’s Eloi would stampede in the opposite direction of any period adaptation of a D.H Lawrence novel. I know, I know — D.H. who?

More particularly would Clooney-Damon or DiCaprio-Depp even perform it? I wonder. If they did (and if the film turned out as well as Russell’s) this scene would be a bit of a “holy shit!” moment for a lot of people out there. Or would it? I’m mentioning this because the wrestling scene — famous in its time — has been largely forgotten, certainly among the 35-and unders (if they even knew of it in the first place). As has Women in Love itself, I suspect.

Apologies for this clip — it’s been idiotically layered with a ridiculous music track and the genitalia of Oliver Reed and Alan Bates have been CG’ed into a blur. Russell shot this scene straight on.

An early reviewer of Lawrence’s “Women in Love,” published in 1920, reportedly wrote, “I do not claim to be a literary critic, but I know dirt when I smell it, and here is dirt in heaps — festering, putrid heaps which smell to high Heaven.” 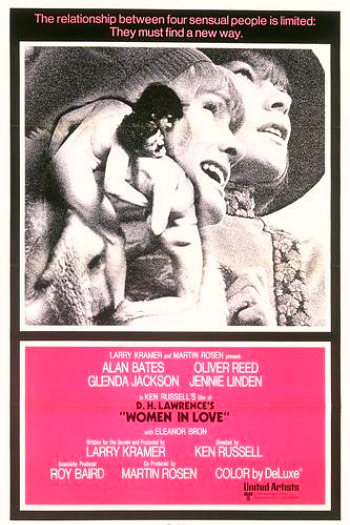