Will you look at this odious operator? I’m sorry, that came out wrong. What I meant was, will you look at the face of Jordan Yospe, a wheeler-dealing Manatt-Phelps attorney who brings home the bacon for his partners and his family by aggressively scheming to put products into movies “before the movie is cast or the script is fully shaped,” according to a 4.4. N.Y. Times story by Stephanie Clifford. Product placement is nothing new, she notes, but Yospe is hustling in a more aggressive and inside-ish way, inserting products into scripts at seminal stages. 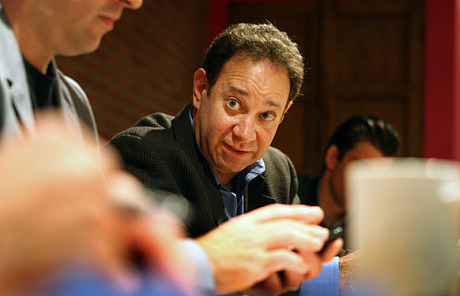 All I know is that in their day, directors like Sam Fuller, Sergei Eisenstein, John Ford, the ’70s version of Francis Coppola, Howard Hawks, Bernardo Bertolucci, Pier Paolo Pasolini, Stanley Kubrick, Robert Bresson and the 1950s incarnation of Nicholas Ray might perhaps meet with an operator like Yospe, just to be civil, but it wouldn’t be long before they’d leap up from their chairs, grab him by the lapels, bitch-slap him and toss him out of the conference room.

The point of Clifford’s story about men like Yospe and the syndrome they represent is that those days are over, and it’s time to deal with guys who, if they had their druthers, would make every brand seem a bit more conspicuous than it should be. These are the Hollow Men, and they more than have their foot in the door these days, which means, of course, that a process of slight but persistent polluting of the atmospheric aura of films is increasing. Which means in a roundabout way that thematic and spiritual elements in films are being subtly affected also.

“Now, having Campbell’s Soup or Chrysler associated with your project can be nearly as important to your pitch as signing Tom Cruise,” Clifford writes.

A contemporary urban flick without occasional recognizable brands flashing in and out of frame always feels slightly off, but you know with a guy like Yospe pulling strings there’s a decent chance that the brands will probably seem a bit too noticable.

As I wrote last September in response to a Hollywood Reporter piece about product placement by way of Brett Ratner Brands, “The attitude of the camera should always be, ‘Yeah, okay, a medium-sized Starbucks coffee is being sipped by the star of the film, but so what? Pay it no mind and listen to the dialogue.’ It should be, at most, a tiny bit more than subliminal.

“Because once the appearance of a product registers a little too much, even for a second or two, the spell of the film is faintly disturbed because someone, you sense right away, has cut a deal.

“When did conspicuous product placement start appearing in films? I haven’t done the research but I wouldn’t be surprised if it was proven to have mainly begun in the ’80s, when TV executives began to migrate into producing features and running studios. Or in the ’90s, when the mentality of bottom-line corporate-think began to manifest more and more in films. I know that it was fairly unusual to spot a noticable brand of anything in movies of the ’70s.”

Yospe “cut his teeth wedging brands into shows like Survivor and The Apprentice while he was general counsel at Mark Burnett Productions,” Clifford writes.