“There’s always a feeling of slight excitement as your jet angles down and over the Mediterranean and gets closer and closer to the sparking blue water with the hills of Nice in the distance and the white beaches and palm trees and oceanside condos and whatnot….it’s quite a vibe.” 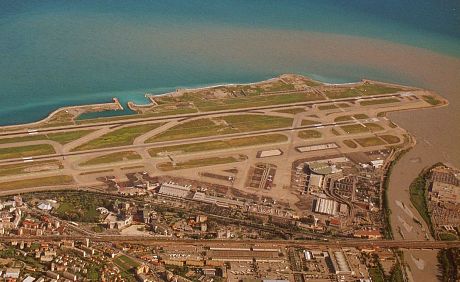 So began an e-mail I sent this morning to a friend who’s attending the Cannes Film Festival — two and a half weeks off — for the first time. She’s never been to southern France or the Cote d’Azur, never seen the Mediterranean…nothing. And was asking this and that question.

“I’m flying straight to Nice from NYC this time — never done that before,” I wrote. “Eight and a half hours…awful. I usually fly to Paris and give myself a leg-stretch for a couple of hours before taking an Easy Jet down to Nice. I don’t know what I was thinking when I booked it. I hate flights that last more than five or six hours.

“Cannes is teeming with little cafes and restaurants. But I’ve made a point in the past of eating only warm paninis out of the food trucks (cheaper) and free party food. The only time I pay for a meal is the first night at La Pizza, and perhaps one other time during the festival. My 24-7 motto is cheap-ass, cheap-ass, cheap-ass.

“And it’s going to be worse this time because I’m not eating pizza as a rule, and bread is a general no-no, of course, so fewer paninis. And I’m drinking less wine these days — water, Diet Coke instead. Beer is out. Free cappucinos inside the Orange press room inside the Palais. But I always grab a double cappucino before the first screening of the day at 8:30 am.”